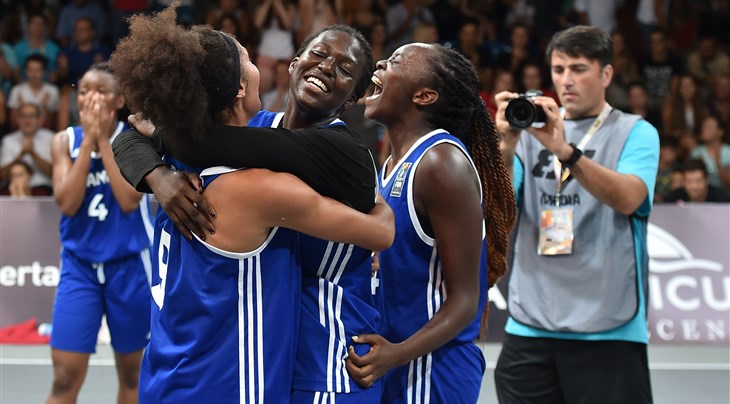 At 1, we gotta talk about France. Is a three-peat coming? Les Bleuettes have won back-to-back titles after defeating the US in both finals. As a result, USA Basketball sent maybe their best team ever, including Destiny Littleton, a girl who had Wilt Chamberlain-like stats in high school this year. Keep an eye on last year's semi-finalists Spain and Czech Republic too, who are back with more stars than Hollywood Boulevard.

At number 2, Qatar shocked the world last year by beating Tai Wynyard and the reigning champs from New Zealand. This year, they will be the team to beat though big man Seydou Ndoye is the only player back for the reigning champs. China will be a team to watch after beating Qatar and winning the FIBA 3x3 U18 Asia Cup earlier this year. Also don't sleep on maybe the best Filipino team ever at the competition and a Belgian team that finished 2nd at the FIBA 3x3 U18 Europe Cup last year.

Coming up at 3, the beauty with 3x3 is it's an opportunity for new countries to be on the basketball map. Bahrain, Jordan, Singapore, Turkmenistan and Uganda will make their debut in the competition this year.

At 4, the FIBA 3x3 U18 World Cup is always a chance to meet the 3x3 stars of tomorrow, those who may represent their country at the Tokyo 2020 Olympic Games. Several players in Chengdu are part of the FIBA 3x3 Fast Track program, which is designed to help member federations identify and train a new generation of U18 (and U23) 3x3 players. The high-flying Maik Bouwer (Netherlands) is one of them. He also made our list of the Top 10 players to watch.

Last but not least, at 5, raise your hand if you're looking forward to the Dunk Contest. Last year, Belgium's Zacharie Mortant did a full one-man show which included dunking next to the prettiest girl in the building, dabs and topless jams. Can anyone possibly top that?