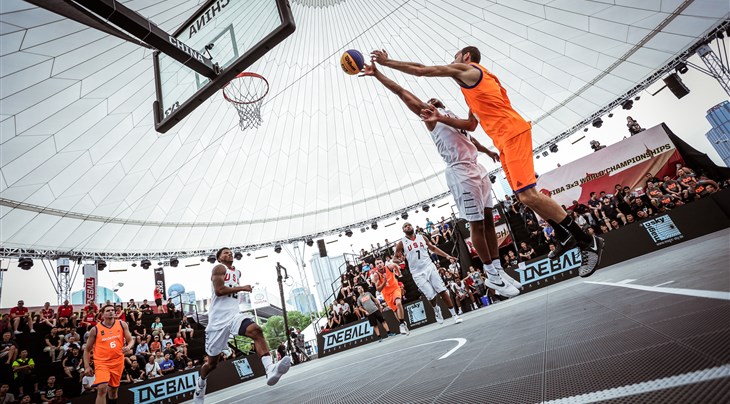 NANTES (FIBA 3x3 World Cup) - No need to wait for the knock-out rounds, the heavyweight battles start as soon as the pool phase at the FIBA 3x3 World Cup 2017, in Nantes, France on June 17-21.

We looked at the 80 pool games, debated among the team and made our picks. Here are the Top 5 games to watch at the FIBA 3x3 World Cup.

1. The only men's pool game between two Top 5 teams
2. Both teams reached the quarter-finals last year
3. A revenge of the 2016 AND 2014 editions (USA won both times in the pools)
4. US star Dan Mavraides got game and a tendency to appear topless on his Instagram account (23% of the time to be precise)
5. The Dutch national team has been a very reliable provider of Top 10 highlights in recent years.

1. The winners of the last 2 editions of the FIBA 3x3 Europe Cup
2. In 2016, Hungary stopped Russia from going back-to-back in the semi-finals.
3. Only USA could beat Russia in 2014. With the US out, is it Russia's year?
4. Hungary may have the best passing game in the women's category.
5. Hungary star Alexandra Theodorean won a gold medal at the Skills Contest last year and she's got a 3x3 logo tattooed on her ankle.

1. Last time France played at the World Cup (2012), they struck silver.
2. When France plays in Nantes, the Filipino team will learn what loud means.
3. We've seen Filipino fans everywhere we played 3x3. In Nantes too?
4. Kobe Paras won 2 gold medals at U18 level at the dunk contest and now he's got arms bigger than The Rock? We're intrigued!
5. Between 'The Undertaker' and 'The Tsar', France have 2 of the best players and solid nicknames in the 3x3 game.

1. Nothing tops a good old neighbor rivalry.
2. Both teams reached the quarter-finals at the World Cup last year.
3. Gimeno and Montenegro led Spain to bronze at the 2015 European Games.
4. Hope we'll have good slow-mo because Caroline Hériaud is faster than a TGV
5. The only thing that's better than Sabrina Palie's handles is her 3x3 haircut.

1. Two titles and one silver medal: Serbia have the best World Cup resume by and it's not even close.
2. Puerto Rico are no 3x3 rookies either: Jonathan Garcia is a true 3x3 OG, having won the 1st edition of the professional FIBA 3x3 World Tour in 2012 and the same team finished 3rd at the World Tour last year. Danger!
3. This game gets even more mental if Russia (also in the pool) pulls an upset.
4. Wil Martinez and Gilberto Clavell might be 2 of the best trash talkers in the game.
5. He's been the number one 3x3 player in the world for 2 years: Dusan Bulut!