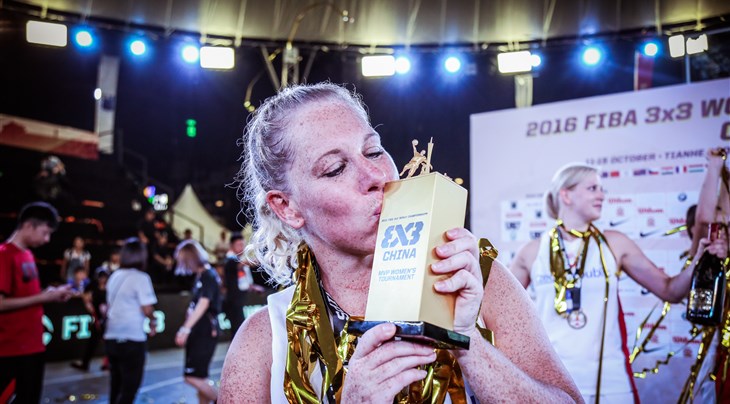 NANTES (FIBA 3x3 World Cup) With the fourth edition of the FIBA 3x3 World Cup approaching (June 17-21), here’s a look at the top 10 women who should have asterisks next to their names and should make some noise in Nantes.

The No. 1-ranked 3x3 player in Hungary has the biggest target on her back. With a 3x3 tattoo on her ankle, this is more than a game for Theodorean. It’s a lifestyle. Despite individual accolades (she won Gold at the FIBA 3x3 World Cup 2016 skills contest), Theodorean will look to lead her country to Gold after finishing 6th at last year’s World Cup.

The Nantes native will be playing on her home turf and will accept nothing less than Gold as she enters the World Cup. The former FISU World University 3x3 champion and lightning-quick guard will try to lead France back to the medal rounds, like at the World Cup 2012 when an Helena Ciak-led team collected silver in Athens, Greece.

Switzerland may not be the biggest powerhouse in basketball but the versatile Rol has transformed the country into a contender on the 3x3 scene. Just one year removed from reaching the semi-finals at the FIBA 3x3 Europe Cup, she's hoping to make an even deeper run after crossing the Alps.

A girl that size is not supposed to be that skilled. Gimeno won bronze in the Shoot-Out Contest of the FIBA 3x3 Europe Cup last year. Bronze is also the color she saw at the 2015 European Games. She will be chasing another metal in France.

Jacobine earned the nickname 'Killa Klerx' after breaking a few ankles at the FIBA 3x3 World Cup last year and at age 22, she's already established herself as one of the best 3x3 players in the world.

Another post player with a soft touch from behind the arc, Zarytska has been dominating the 3x3 game for the past few years, leading an unheralded Ukrainian team to silver both at the 2015 European Games and at the FIBA 3x3 World Cup last year, where she earned "Team of the Tournament" honors.

Not only is Mijovic the tallest player at the event, but she may be one of the most versatile one, too. She has the ability to finish around the rim and extend out to the 2-point line and knock it down at a consistent rate. Mijovic looks to bring Australia to prominence after a bittersweet 11th place finish at the World Cup last year.

After a successful basketball career that saw her play in 2 Olympics, Uhrova made a sensational transition to 3x3, leading Czech Republic to the world title last year. After last week's decision, she can now target a third Olympic appearance... playing 3x3 in Tokyo in 2020.

Tognalini is looking to up her play after placing 9th in the FIBA 3x3 Europe Cup and World Cup in 2016. She’ll be entering the event with two newcomers (Rae Lin D’alie and Alice Richter), but will take them under her wing, as she’s no stranger to international events. She's also responsible for one of the most iconic 3x3 photos of all time.