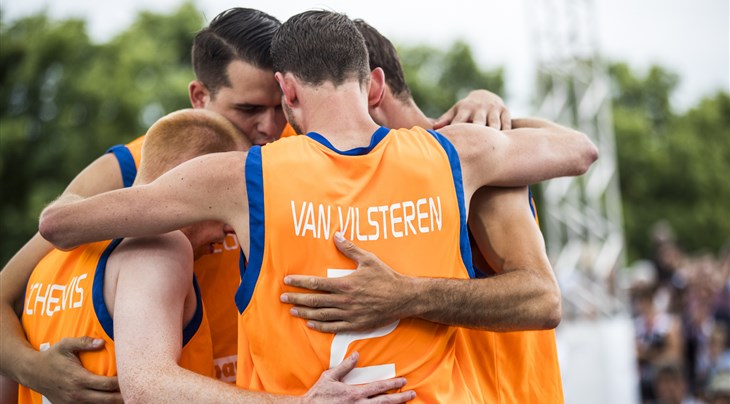 It's not just the fact that Belgium became the first-ever team to complete the U18 World Cup - U18 Europe Cup in the men's category. It's the way they did it. Ayoub Nouhi and Vincent Peeters dunked so much this summer, they're now known as the Poster Brothers. And the Top 10 Belgium of 2017 may well be one of our best videos of the year.

Indonesia had hosted a large amount of basketball events before, including the very successful FIBA 3x3 U18 World Cup back in 2013. But never had they won a continental title. Until the do-it-all Lea Kahol powered her country to an unexpected gold medal this spring at the FIBA 3x3 U18 Asia Cup in Malaysia.

Speaking of upsets, Latvia came out of nowhere this summer and beat all the best teams in the world one by one at the Europe Cup. The young one-two punch of Karlis Lasmanis (23) and Nauris Miezis (26) knocked out the World Champions Serbia in overtime in the semi-finals before dominating the reigning European Champions Slovenia in the final.

Similar to Indonesia, Mongolia put their name on the 3x3 map this year. Their star Dulguun Enkhbat led the country to a fantastic title at home in Ulaanbaatar, in a tournament that also featured the best teams from Oceania for the first time ever. And it's only the beginning for Mongolia. Following the outstanding performances of their players (including a semi-final run at the World Tour Utsunomiya Masters for Team Ulaanbaatar), Mongolia will compete in their first World Cup in 2018.

The same 4 players who represent Serbia in national team competitions had the perfect season at the World Tour this year. They became the first team in history to qualify for every single Masters (7) and won 3 of them (in a row). They were up 4 points with a bit more than a minute to go in the championship game at the FIBA 3x3 World Tour Bloomage Beijing Final before Bogdan Dragovic buried the most insane game-winner ever for Zemun Master. Despite losing that game, they still finished the season number one in the FIBA 3x3 Team Ranking.

It's one thing to complete the World Cup - Europe Cup double in U18 categories, Belgium. It's a whole new level to do it in the senior categories like Russia did in 2017. Anna Leshkovtseva dropped bodies at the World Cup and passed the baton to the towering Anastasia Logunova at the Europe Cup. Russia went a combined 12-0 at these 2 events. Total domination.

We mentioned Bulut's team before. While they still couldn't win the only silverware they're missing in the trophy cabinet (the Europe Cup), they achieved something pretty unbelievable: win their 3rd World Cup in just 4 editions, with both MVP Dejan Majstorovic and Dusan Bulut in the team of the tournament.

If you thought Russia's 12-0 record was impressive, how about Slovenia's 20-0 record at the U23 Nations League? MVP Tjaz Rotar's team won every single game in the 1st edition of the U23 Nations League in 5 stops while none of them were played at home (1 in Hungary, 2 in Czech Republic and 2 in Sri Lanka). The team is now planning to take over the World Tour. Zemun Master, beware!

After they lost back-to-back finals in the last 2 Masters of the World Tour season, there were legitimate concerns about the Serbian team's ability to deliver in the money time. Nobody's questioning their heart now after the team achieved one of the most amazing come-back wins in World Tour history in the championship game against two-time winners Novi Sad Al Wahda. And if you're like us, you've watched Bogdan Dragovic's game-winner more than 100 times and still get goosebumps after the ball goes swish.