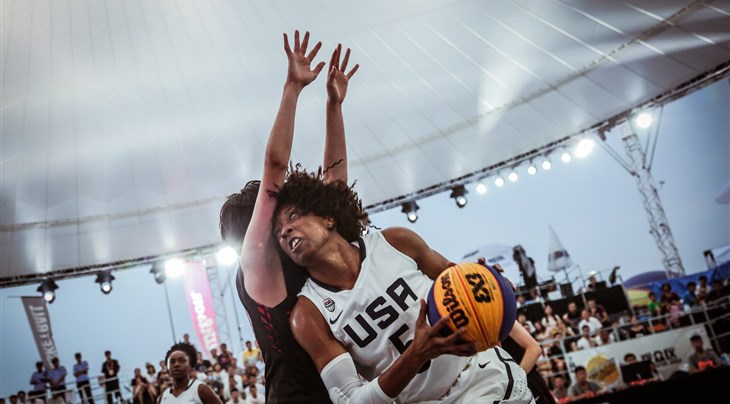 CHENGDU (FIBA 3x3 U18 World Cup 2017)- Team USA continued to show their dominance as they finished Day 4 competition with perfect a record 4-0 at FIBA 3x3 U18 World Cup in Chengdu China.  There were lots of excitement and last minute drama as both women and men’s team fought for their spot. The most dramatic might have been a three way tie in women’s Pool A of Australia- Japan- Hungary that led Hungary to the quarter-finals. Meanwhile, men’s Pool C was decided in the final game of the day. Here is our recap.

Team of the Day: USA (Women)

The foursome from  the United States went 4-0 in pool play competition and brought their  best game on Day 4.  First in the day, they topped Switzerland with a score of 19-11. Even though they secured qualification to the next round, Team USA did not let up their playing intensity. They faced an even tougher opponent in Team Australia and beat in a resounding 20-11 score. Aquira Decosta showcased her moves scoring 7 points in the game and 11 on the day. They will face France in the quarter-finals.

Game of the Day: China vs. Slovenia (M)

Men’s team qualification to the quarter-final came down to the last game on Day 4. Team China and Team Slovenia both needed a win to qualify to the next round. The court was electric as home crowd chanted “Xiong qi” or “Go China”. Slovenia took an early lead of 6-0 but China came roaring back to tie the game. However, Slovenia pulled away in the last minute to win 18-15 to qualify for the next round for a showdown against Ukraine.

Team Ukraine left the pool stages with an undefeated record and they can attribute  that to the play of Ivan Myskovets. With a phenomenal match against Georgia, the 17-year-old scored five 2 pointers and one monster dunk that topped the Top 5.

Dahlia Monteiro of Switzerland won the first gold medal of the FIBA 3x3 World Cup 2017 in the skills contest.  She won a close contest against Argentinia’s Josefina Torruella while Aquira DeCosta won bronze.