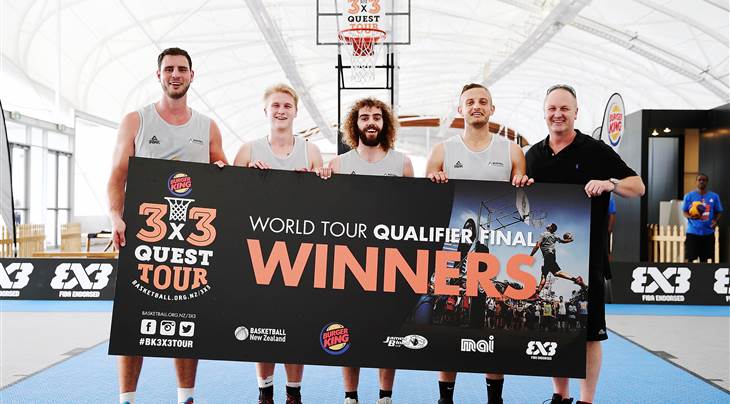 After a rocky start which saw them finish second in their pool, Tamaki-Central team-mates Rory Fannon, Sherif Hassan, Anthony Jones and Connor Woodbridge made their way to a much-anticipated final against Team Auckland.

Team Auckland competed in each one of the 5 previous editions of the World Tour and Tamaki-Central’s captain Fannon… featured on Team Auckland at the Beijing Masters last year.

The game was a back and forth slugfest. The lead was traded throughout right up until the final anxious moments and the game tied at 19. Both teams had a chance to win the game and it was the youngest player on the court, Woodbridge (18) who sealed the deal for the Tamaki team with the clutch shot from behind the arc (21-19).

"Coming down to the last basket we were all exhausted," said Fannon.

"My back was hurting, so I'm just so glad we could pull it together. Connor was the real hero of the game and was amazing for us down the stretch, he deserves all the praise."

The sharp-shooting Woodbridge, who was playing in just his second official FIBA 3x3 tournament, did share some of the praise with the rest of the gang.

"It was great to be part of an excellent group of players that welcomed me in straight away," commented the teenager.

"I'm happy at how our team played, and glad to get my teammates involved early and have a chance to win it at the end."

With New Zealand’s strong track record in FIBA 3x3 events, Team Tamaki-Central will be a team to keep an eye on during the FIBA 3x3 World Tour Utsunomiya Masters in Japan on 29-30 July 2017.

The full FIBA 3x3 World Tour calendar will be announced this week.