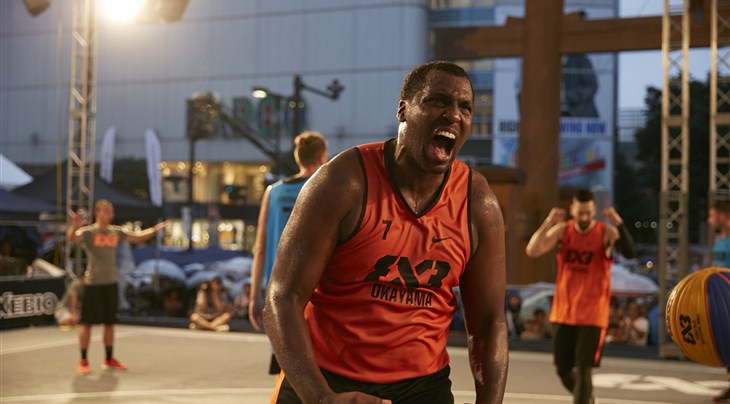 UTSUNOMIYA (FIBA3x3 World Tour)- The 2nd stop of the FIBA 3x3 World Tour in Utsunomiya, Japan on July 29th, 2017 started with a strong performance from Team Okayama even among six out of eight of the top 3x3 teams in the world. Team Okayama surprised the competition with spectacular plays and 2-0 start in pool play.

In Pool A, the top seed and the World Tour Saskatoon winner’s Team Ljublana were playing with only 3 players as Tomo Cajic suffered an injury. Despite their best efforts, Ljubljana fell first timers Team Ulaanbaatar in and in a tight game against local favorites Team Okayama.  Meanwhile Team Okayama won both their games in dramatic fashion earning team of the day honors . They won a nail biter with 19-18 win over Ulaanbaatar then in their game against Ljubljana another tight one with 14-12 win. Devaughn Washington led the team with 21 points and a Number 1 Top 5 Play.

From Pool B, last year’s winner Novi Sad Al Wahda (UAE) won both their games even as they were missing one of their core four player’s Marko Zdero. While in Pool C, Team Piran (SLO) won their games showcasing their teamwork and experience. Even though they faced hot handed Michael “Money in the Bank” Hicks from Team Krakow (POL) who was Day 1’s Player of the Day scoring 8 two-pointers.  Finally, Pool D had a Serbian showdown between Team Liman and Team Zemun for Top spot. Despite the rainy conditions at the end of the night,  Zemun defeated Liman 21-19 with a final 2-pointer.

Each pool game could have been at the World Tour Final!

Please note that the schedule will start 30 minutes earlier at 14H JST.