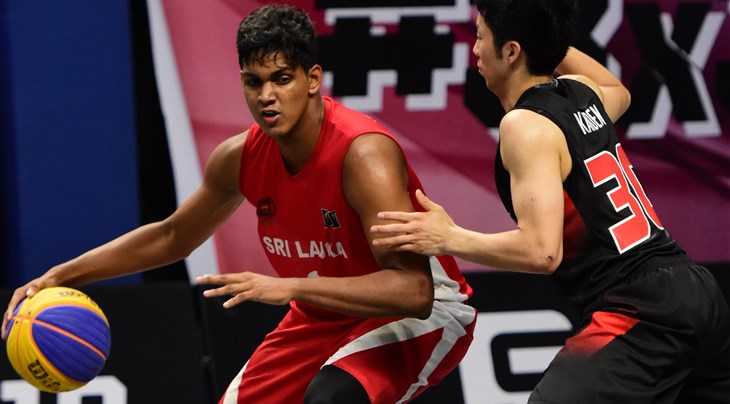 Team of the Day: Sri Lanka

Sri Lanka did not exactly stand among the favorites before the start of the competition after finishing 6th with the women and 9th with the men (out of 10) last season.

One year later, both teams are set to come back on Day 3 for the quarter-finals and the men's team is just 1 of 2 teams to have a perfect 2-0 start at the event (Chinese Taipei's men is the other one).

The silky smooth Shivanga De Silva led his team past Japan (16-15) and Kyrgyzstan (20-17) and in the women's category, Sri Lanka defeated Kazakhstan (15-13) and clinched their qualification in a 3-team tie by just 1 point on total points scored after a loss to Malaysia (10-18).

When you scratch the veneer, Sri Lanka's success on Day 1 wasn't all that surprising considering the country has invested in the development of 3x3 by joining the FIBA 3x3 Fast Track program.

The 17-year-old playmaker wasn't the top scorer of the day (he ranked 5th with 15 points - Cheng-Ya Chang's (Chinese Taipei) topped all scorers with 32 points). However, he wowed the crowd with his mean crossover and his ability to finish in traffic. The Internet says he's also a bright student and a swimming champion. Is there anything this young man can't do?

The best game of the day was also the final one. China took a 15-13 lead with 3'30 to go, led by the tallest player of the tournament Lutubula Lutubula (2.08m). Chinese Taipei then went on a 5-0 run and sharpshooter Chen-Ya Chang finished things off from behind the arc.

The game featured a long list of amazing plays, including a jaw-breaking acrobatic lay-up courtesy of Chinese Taipei's Jonah Morrison.

Chinese Taipei were the only teams to win both their games before the (10-minute) limit. They actually went 4-0 on Friday if you take into account that they made their way to the pool phase by winning a qualifying draw in the morning (against Singapore and Vietnam).

Huỳnh Vinh Quang (Vietnam) and Syimyk Esenaliev (Kyrgyzstan) both went 6/10 from behind the arc to secure a spot to the final of the shoot-out contest on Sunday.

They will be joined by the two best shooters of the women's category, who will compete in a qualifier on Saturday.

Day 2: 3.30-8pm local time (GMT+8) on youtube.com/FIBA3x3 including the debuts of last year's two men's finalists, Qatar and the Philippines.