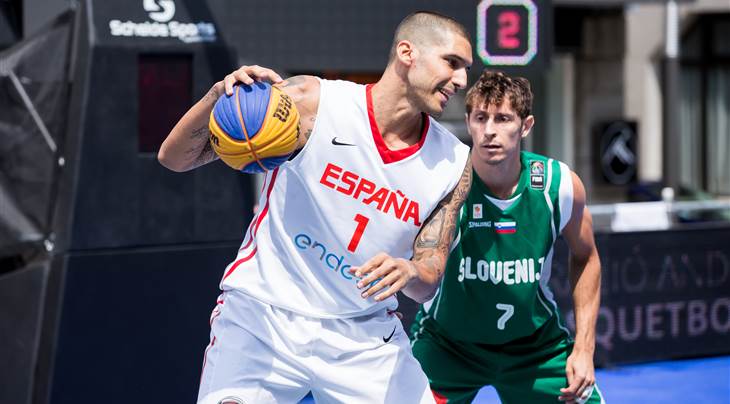 Nacho Martín is a household name for those who follow Spanish basketball. The 33-year-old power forward has been a force in the ACB for more than 10 years. The Valladolid native even represented the senior national team in several friendly games.

There was nothing friendly about Martín’s amazing campaign at the 3x3 event of the 2015 European Games. The man also known as ‘Da Flow’ led Spain to a stunning silver medal in Baku, Azerbaijan. Since then, he has been a regular in 3x3 circuits.

We caught up with the athletic 2.05m star after he announced he would get even more involved in 3x3 basketball with a couple of camps for kids between 7 and 20 years old, over the summer.

How did you come up with the concept of a 3x3 camp?

I’ve had this idea in mind for a long time but didn’t know how and where to do it. This season, I am playing basketball in Andorra and I have a good relationship with all the people in charge of 3x3 here, including my future partner Jordi Olcina.

I thought it was the best moment to do it. We will have two editions in Madrid and Andorra this summer and I hope it is the start of many more editions.

Do you see Andorra as the perfect place because of their recent work and success in 3x3?

Andorra is a place where 3x3 is played a lot. There aren’t too many people, it’s a small country and yet kids play 3x3, the national teams play 3x3 and they travel and qualify for international tournaments such as the World Cup.

This is important to me and it’s one of the reasons why I think Andorra is one of the best spots.

Then I chose Madrid as the second stop of the camp this summer because it’s the capital of Spain. There are a lot of people playing 3x3 there as well.

Why do you think it’s important to work with the grassroots?

I want to push 3x3 with the kids on a daily basis, besides all the initiatives and events organised by the national federations. I think we need a big jump forward, especially if we want 3x3 to be in the next Olympics. We can’t go there without developing 3x3 from the grassroots to the top level. I think there is no camp quite like the one I will organise this summer.