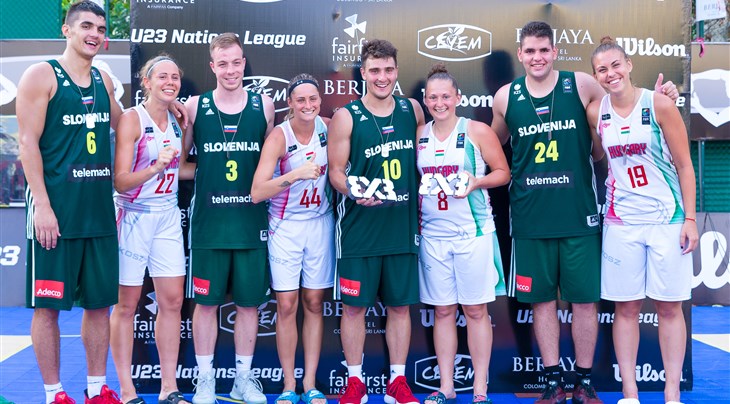 The national team competition is a pillar of the FIBA 3x3 Fast Track program, which is intended to help national federations develop specialized 3x3 players and identify future Olympic medalists.

The inaugural edition brought together the U23 men's and U23 women's teams of 5 of the members of the program: Czech Republic, Hungary, the Netherlands, Sri Lanka and Uganda. Teams from Jordan, Slovakia and Slovenia also participated in all or some of the stops.

The 5-stop competition started in Podgebrady, Czech Republic and was followed by two stops in Szolnok, Hungary and the last two stops in Colombo, Sri Lanka.

Slovenia dominated the men's competition from start to finish. Not only did they win all 5 stops, they finished undefeated with a perfect 20-0 record.

The final of Stop 5 was however their narrowest win as the Netherlands were powered by the dunking antics of Dylan van Eyck. Nevertheless, the Slovenians came out on top (21-19) thanks to the inspired play of U23 Nations League top scorer and MVP Tjaz Rotar.

In the women's category, the race was much tighter between Czech Republic, the Netherlands and Hungary, who could all win the title heading into Stop 5.

Czech Republic featured 2016 FIBA 3x3 World Champion Sara Krumpholcova. Yet the Netherlands defeated them in the semi-finals and moved on to a much-anticipated final against Hungary, who defeated an astonishingly-improved Sri Lanka.

In the final, tournament MVP Vivi Böröndy led Hungary to an early lead and never looked back. 2014 Youth Olympics silver medalist and tournament top scorer Charlotte van Kleef buried back-to-back two-pointers to bring the Netherlands within shooting distance but it was too little too late as Hungary changed gear and won in convincing fashion (19-9).

It was played successfully for the first time in international competition at the 2010 Youth Olympic Games in Singapore and since then has benefited from the launch of a yearly city-based FIBA 3x3 World Tour (www.fiba.basketball/3x3worldtour) and national-team competitions.