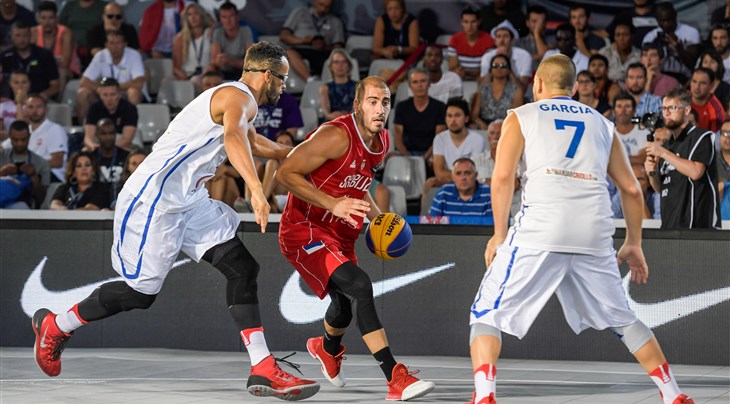 NANTES (FIBA 3x3 World Cup 2017) – Serbia lived up to the hype and remained undefeated on Day 3 at the FIBA 3x3 World Cup in Nantes, France on June 19 2017. The USA made it rain from outside the arc and the Netherlands won an absolute thriller against Australia. Here's our wrap-up.

Team of the Day: Serbia (men)

Never underestimate the heart of champion. With Serbia involved in a potential three-win tie with Russia and Puerto Rico, the reigning world champs upped their game for back-to-back wins before the limit (against Andorra 22-13 and Puerto Rico 21-14). And this time it wasn't a one-man show as the number one 3x3 player in the world Dusan Domovic Bulut and team-mate Dejan Majstorovic ended the day tied on top of the scoring charts.

With a qualification for the quarter-finals on the line, the Netherlands and Australia brought the crowd to its feet. Australia's Amelia Todhunter buried a big two-pointer in the dying seconds of regulation to send the game to overtime. In a do-or-die situation, 26-year-old Karin Kuijt hit the biggest shot of her career.

The Princeton alumnus did it all on Monday, from scoring 17 points (including 6 shots from behind the arc) to doing push-ups on the sidelines and showing his abs to the female audience.