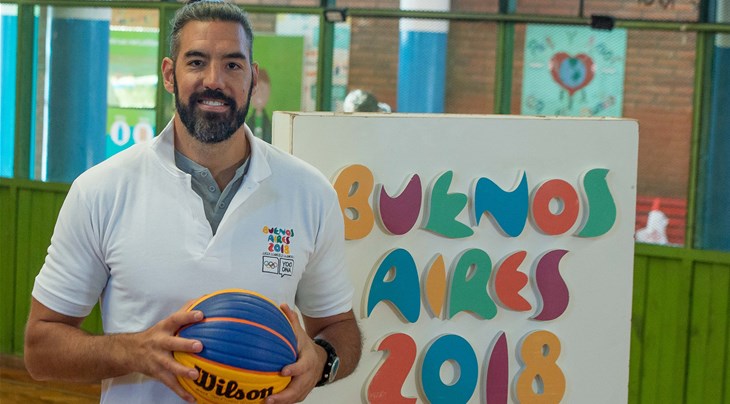 The students learned from the best with a 3x3 basketball skills clinic (3x3 is the only basketball discipline featured at the Youth Olympic Games since its launch in 2010), followed by a "Chat with Champion" session and live painting by students using basketball and the Olympic values as inspiration.

The 37-year-old Scola said: "I am honored to be an Ambassador for the Youth Olympics, especially in my hometown! Being here and seeing the excitement from all the kids is just a taste of what is to come. Buenos Aires 2018 are constantly forward-thinking to make sure this is an event that appeals to young people and I can't wait to be a part of it. It will really be a special atmosphere here in October next year."

The IOC announced Scola was selected for his international sporting achievements and willingness to support the next generation through the YOG in his home nation. He was Argentina's flagbearer at the Rio 2016 Olympic Games and is renowned for being one of the country's "Golden Generation" of basketball players. Over a 12-year period, through their achievements at major tournaments, they have changed the face of basketball nationwide - in its professionalism, style of play and team spirit.

Off the field of play, the 6ft 9in (2.06m) big man is an active member of the IOC's Athletes' Commission, representing the views and interests of current and future Olympians, and has already been seen around Buenos Aires with the Organising Committee supporting community events that have reached close to 400,000 people with sport and cultural activities ahead of the Games.

The IOC chooses Olympians to be Ambassadors for each edition of the YOG to help reach and inspire young people to get active. Sporting legends such as Usain Bolt, Michael Phelps, Yelena Isinbaeva, Michelle Wie, Yao Ming and Chad le Clos have supported previous summer YOGs.