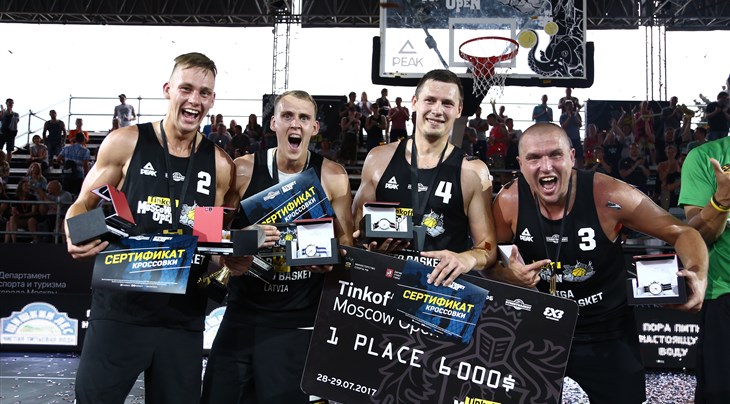 MOSCOW (3x3 Challenger) - The 4 members of the Latvian national team who shocked the World at the FIBA 3x3 Europe Cup 2017 will now make their pro debut at the FIBA 3x3 World Tour after winning the Tinkoff Moscow Open in Moscow, Russia on July 28-29.

Big man Edgars Krumins buried two even bigger shots from outside the arc in the last minutes of the game to lead Riga past Kranj (SLO) in the final (21-14).

But it was 23-year-old Karl Lasmanis who was named MVP of the event for his outstanding performance during the 2 days of action.

Both teams will compete at the Debrecen Masters on August 31 - September 1.

While Riga clinched their first ticket to the World Tour this season, the rejuvenated Kranj team already have a pass to 3 Masters (they will compete in Lausanne and Chengdu as well).

Four teams in the World's Top 15 battled it out in Moscow.

The next 3x3 Challenger will be held in Bucharest on August 12-13. The two best teams there will qualify to the Lausanne Masters on August 25-26.