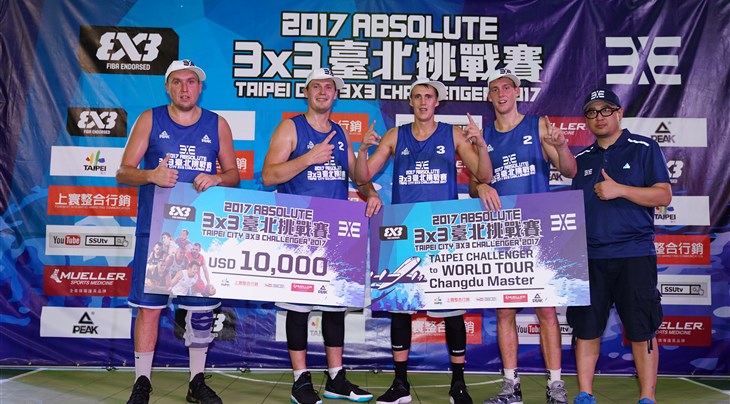 Piran looked destined to take home the trophy as Simon Finzgar aka 'The Sphinx' buried a cold-blooded two from the wing with 30 seconds to go to give the Slovenians a 2-point lead. But with 6 seconds on the clock, big man Edgars Krumins responded from behind the arc and brought the game to overtime.

Piran had several chances to win the game in overtime but the 23-year-old Karlis Lasmanis rose to the occasion with a hard drive to the basket and the tip-in lay-up for the win.

Riga bounced back with style after a disappointing day 1 where they lost against Ulaanbaatar Garuda (MGL) in the pool phase.

It is the team's third win at a Challenger this season after the Tinkoff Moscow Open and the Raiffeisen Bank Bucharest Challenger. The number one 3x3 team in the world Novi Sad Al Wahda (UAE) is the only other team who reached this mark this season.

With this win, not only did Riga earn 10,000 USD, they also stamped their ticket to the FIBA 3x3 World Tour Chengdu Masters and climbed up the Team Ranking all the way to 5th overall.

Piran had already booked their ticket to Chengdu based on ranking therefore both Riga and third place Ljubljana (SLO) will compete in China on September 23-24.

The reigning World Tour champs Ljubljana (SLO) and Amsterdam PM Inox (NED) both lost in the semi-finals with the same overall winning percentage but Ljubljana finished 3rd overall in the standings based on the next tie-breaker: total points scored (Ljubljana scored 86 while Amsterdam had 83 on the entire tournament).