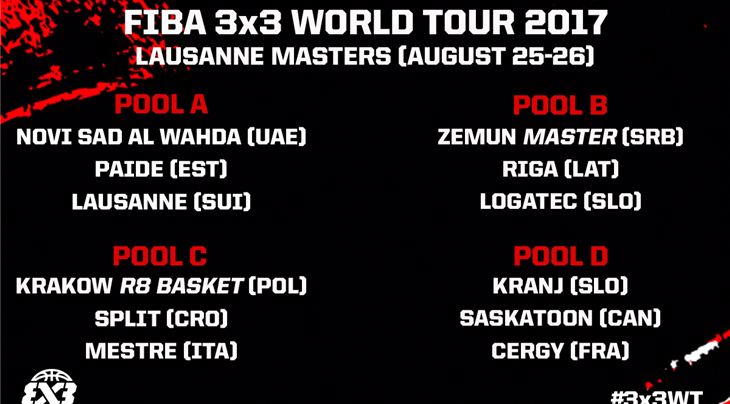 The Canadian team shined at home in Saskatoon (2nd) and at the Prague Masters (5th) but have yet to clinch their ticket to the World Tour Final. The automatic seeding certainly did not make things any easier for them in Pool D.

Kranj (SLO) are actually the winners of the first-ever edition of the Lausanne Masters back in 2013. The team has changed a lot this summer and the do-it-all Mensud Julevic is the only player remaining from that 2013 team. This said, the team still ranks 8th in the world and just recently reached the final of the Tinkoff Moscow Open Challenger.

Cergy are making their official World Tour debut but come with A LOT OF HYPE with big-time professional basketball players Amara Sy and his brother Bandja, Boris Dallo and Georgi Joseph.

And if Saskatoon still go through but finish 2nd in Pool D, they're likely headed to a mission impossible quarter-final against the number one 3x3 team in the world, Novi Sad Al Wahda (UAE), who were seeded in Pool A.

Novi Sad Al Wahda have their own problems though, starting with the absence of the number one 3x3 player in the world Dusan Bulut, who suffered an ankle injury in practice last week.

For their first appearance at the Lausanne Masters, they have an appointment with the local team. Team Lausanne consists of the 4 players who represented Switzerland at the FIBA 3x3 Europe Cup this year and provided more highlights than George RR Martin.

Team Paide (EST) - who feature the bulk of the Estonian national team - will complete the pool.

Two weeks after meeting in the final of the Raiffeisen Bank Bucharest 3x3 Challenger, 2 of the most promising 3x3 teams in the world are up for a rematch in the Olympic capital in Pool B.

Team Riga (LAT) did the impossible and won in Bucharest with just 3 players in their last 3 games. They won 2 of the last 3 Challengers and absolutely shocked the world when they beat Serbia and later brought Latvia the European title in Amsterdam, Netherlands on July 7-9.

Zemun Master (SRB) also won 2 Challengers this season and climbed up the FIBA 3x3 Team Ranking like Spiderman. Nikola Vukovic & co. are now ranked 3rd overall and are looking to finally clinch their ticket to the final after finishing 5th in Utsunomiya and 3rd in Prague.

Logotec (SLO) will try to build on Slovenian teams' past success in Lausanne (they won the first 2 editions).

Last but not least, Krakow R8 Basket (POL) will highlight Pool C with sharpshooter and expert trash-talker Michael 'Money in the Bank' Hicks, who was named the most spectacular player of the Lausanne Masters the last 2 years.

In order to come back on Day 2, the Polish team will need to move past Split (CRO), who finished 2nd overall in the first edition of the World Tour back in 2012 and/or the newcomers from Mestre (ITA), who won the Italian Quest earlier this summer.

For those not attending the games in Place Centrale (entrance is free!), pool games will start at 4pm local time (GMT+2) on Friday live on FIBA 3x3's official YouTube channel. The top-two placed teams from each pool advance to a standard knock-out round which starts at the quarter-finals stage, from 4.45pm local time on Saturday.