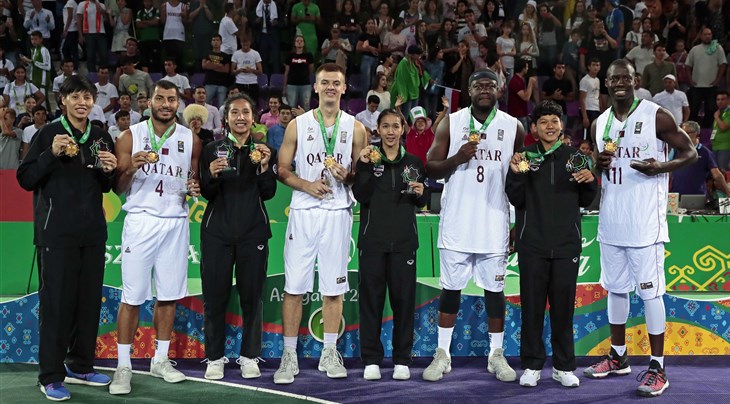 ASHGABAT (3x3) - Qatar's men and Thailand's women bagged gold medals at the 5th edition of the Asian Indoor and Martial Arts Games in Ashgabat, Turkmenistan in front of a fully packed arena on September 24 2017.

FIBA 3x3 World Cup 2014 winner Saeed Ali Erfan scored half of Qatar's points as the eventual champions made light work of the stubborn Iraq 22-12 to ascertain their place at the high table of 3x3 basketball in Asia.

The impressive Erfan was 100% perfect behind the arc with four out of four as he led the Qataris to their fourth gold medal at the event that has attracted 20 other sporting disciplines.

"It is always a pleasure to play well and take the gold medal back home. The whole of Qatar was waiting for us to win." - Erfan said.

In an exclusive interview with FIBA.basketball, Erfan said: "We knew that every game we played at this tournament would be tough but we used our advantage and luckily all our shots dropped. We knew that their big men would not come out so we decided to shoot the ball."

It wasn't a walk in the park for Qatar though, who beat hosts Turkmenistan on a Abdulrahman Mohamed Saad's buzzer-beater in the quarter-finals (14-12).

Next came a nail-biting 15-14 victory over Mongolia, after Tanguy Ngombo scored with just 4 seconds to go.

Mongolia bounced back in the bronze-medal game with a 21-11 win over Kyrgyzstan.

In the women's category, Thailand stunned Uzbekistan 22-20 in an overtime thriller.

Thidaporn Maihom and the speedy Penphan Yothanan scored nine and six points respectively but it was Yothanan, who gave Thailand the win in overtime on a Hail-Mary two-pointer.

Thailand captain Naruemol Banmoo admitted that: "Winning gold here is a wonderful achievement for us as Thailand and it shows that basketball is growing in our country. Now that 3x3 basketball is part of the Summer Olympics, we shall continue working hard and try to qualify."

With a whole country supporting them, hosts Turkmenistan settled for bronze after defeating Syria 15-12.