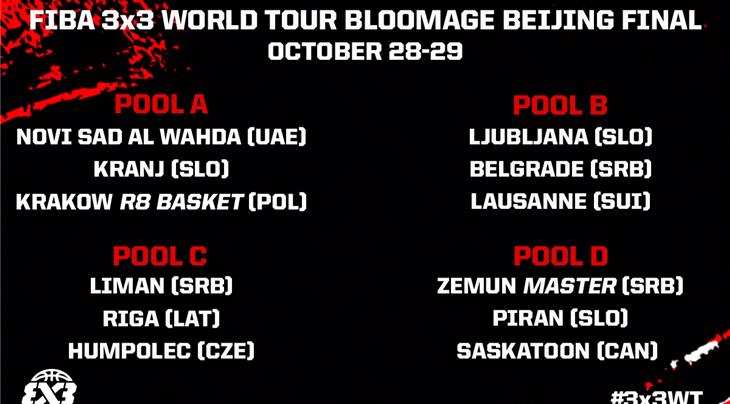 In Pool A, the number 1 team in the World Novi Sad Al Wahda (UAE) could not hope for a better draw. At the World Tour, the 2-time winners are undefeated in 6 games against Kranj (SLO) and unbeaten in 3 matches against Krakow R8 Basket (POL).

Coincidentally, Dusan Bulut's team - who won 3 Masters this year (Utsunomiya, Prague and Lausanne) beat both squads in a Masters quarter-finals this season. Not once, but twice each. It gets worse: Novi Sad Al Wahda defeated Kranj at the World Tour Final every single year for the last 4 editions!

After revamping their team in the offseason, Kranj are looking to regain the form that saw them finish second overall in Abu Dhabi back in 2015. They dominated reigning champs Ljubljana at the Chengdu Masters this season and reached 1 semi-final and 2 quarter-finals this year.

Krakow R8 Basket also reached 1 semi-final and 2 quarter-finals this season and will once again rely on the offensive punch of World Tour scoring leader (on average) Michael Hicks (10.2 points per game).

Like it is the case in all World Tour events, the seeding is conducted automatically according to the 3x3 individual World ranking (of the three best players from each team). According to the FIBA 3x3 regulations, teams are seeded as follows:

Reigning champs Ljubljana will headline Pool B. The winners of the Saskatoon Masters this season will have another tête-à-tête with Belgrade (SRB) and a first encounter with Lausanne (SUI) on the opening day.

Ljubljana beat Belgrade twice in the quarter-finals at the World Tour this year (both in Prague and Debrecen) but Mr Crossover Dragan Bjelica's team is peaking at the right time (3rd in Mexico City) and have proven in the past they could take down the much bigger Ljubljana team (they defeated them in Prague in 2016).

1 foot and 4 inches (41cm) is what separates the tallest player at the event (Ljubljana's Blaz Cresnar) from the shortest (Lausanne's Gilles Martin). But Team Lausanne proved that what they lacked in size, they had in heart. They notably beat the number 1 team in the world Novi Sad Al Wahda in the pool phase of the Lausanne Masters. They're also more athletic than Bilbao, looking at 22-year-old Natan Jurkovitz's mixtape.

After a timid start, Liman switched to 6th gear and won both the Debrecen and Mexico City Masters at the end of the season, with memorable wins against the winners of the last 4 editions Novi Sad Al Wahda and Ljubljana.

Riga won 3 Challengers this season but did not manage to cash in at the World Tour. They ended their return in the semi-finals 3 times in a row, the latest in dramatic fashion in Chengdu, where they lost big man Edgars Krumins for the season.

Interestingly, the young Liman and Riga teams (25 and 27 years on average) have never met before at the World Tour.

Last but not least, Pool D is officially the Pool of Death, starting with former World Tour runner-ups (in 2014) Saskatoon (CAN), who went all the way to the final on their home soil for the first Masters of the season and have beaten both their rivals at the World Tour, in previous years.

They dominated Piran (SLO) at the World Tour Final back in 2014. Since then, the Slovenians have enjoyed a real renaissance. Former number 1 player in the world Simon Finzgar is playing the best 3x3 of his life this season and led his team to their first Masters win in 3 years at the Chengdu Masters (not to mention 2 finals).

Saskatoon also defeated Zemun Master (SRB) in Lausanne last year. But since then, the Serbian team morphed into one of the best teams on the World Tour circuit. They competed in 5 Masters this year and finished second twice (in the last 2 Masters of the season in Chengdu and Mexico City).

If you're not looking forward to the game between Zemun and Piran, you don't like 3x3 basketball. These 2 teams squared off in 2 of the biggest thrillers of the season in the final of the Chengdu Masters and the semi-finals of the Mexico City Masters. They're tied at 1-1. Who will win Round 3?

For those not attending the games at the Bloomage Hi-Up shopping mall, pool games will start at 5pm local time (GMT+8) on Saturday October 28 live on FIBA 3x3's official YouTube channel. The top-two placed teams from each pool advance to a standard knock-out round which starts at the quarter-finals stage, from 5.10pm local time on Sunday October 29.