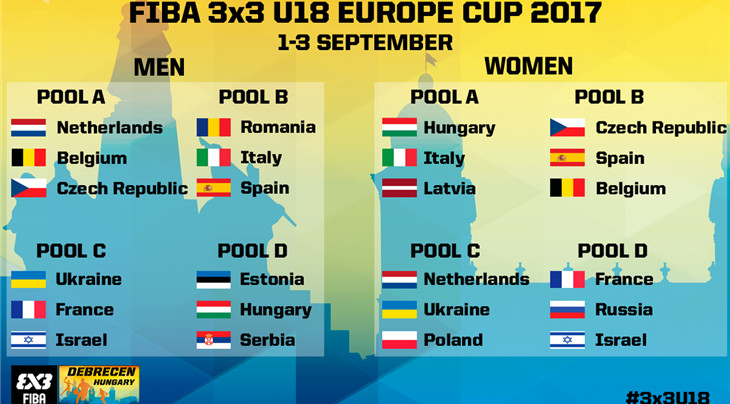 After 2 exciting qualifiers in Riga, Latvia and Szolnok, Hungary, the 12 best men and women's teams will battle out in Debrecen, the second largest city of Hungary and host of the U18 World Cup in 2015 and U18 Europe Cup last year, when France completed a historic double.

Following the automatic seeding based on the FIBA 3x3 Federation Ranking on July 7, pools are as follows:

In the women's category, Pool A will feature Hungary, who won the event in 2015 and finished second last year. The hosts will meet Italy again, whom they defeated in the quarter-finals of the Hungary qualifier last weekend. Last but not least, Latvia will be a threat after they reached the final of the Latvia Qualifier and only bent the knee against Spain in overtime.

Pool C will be wide open with Ukraine and the Netherlands, who finished 3rd and 5th at the Latvia Qualifier respectively and Poland, who were 3rd at the Hungary Qualifier.

Last but not least, reigning champs France headline Pool D after dominating the qualifier in Szolnok. If two teams can beat them, it could be Israel and Russia. The former beat France to win bronze at the U18 Europe Cup two years ago. Russia just came back from the U18 World Cup with a bronze medal around their neck.

In the men's category, the Netherlands and Czech Republic (5th and 6th at the Hungary Qualifier respectively) will face U18 World Cup reigning champs and U18 Europe Cup silver medalists Belgium in Pool A. Will we see Peeters and Nouhi again this year?

Is men's Pool B the most loaded of the tournament? The three best teams from the Latvia Qualifier are in for a rematch. Italy have reasons to show confidence after beating Romania in the semi-finals and Spain in the final in Riga last weekend.

Reigning champs France were seeded in Pool C with the spectacular Ukrainian team (6th in the Latvia Qualifier) and Israel, who went all the way to the the final of the Hungary qualifier thanks to Qualifiers top scorer Tamir Schiller.

Last but not least, it won't be a walk in the park for U18 World Cup 2012 winners Serbia in Pool D as they will play hosts Hungary and Hungary Qualifier winners Estonia.