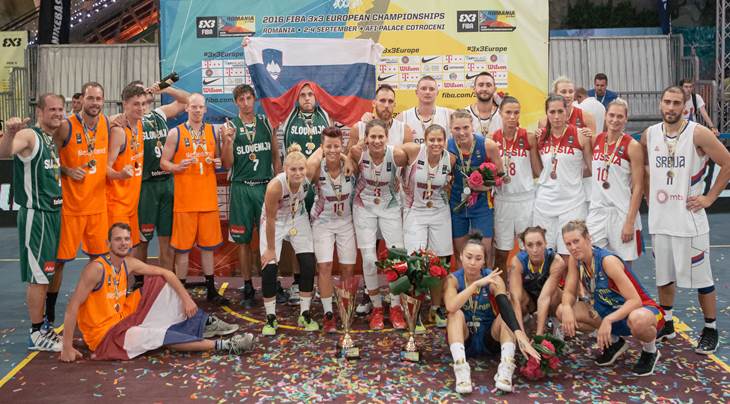 AMSTERDAM (FIBA 3x3 Europe Cup) – Forty-five teams from 26 countries (men and women combined) will compete in two qualifiers in Escaldes-Engordany (Andorra) and Poitiers (France) for a ticket to the third edition of the FIBA 3x3 Europe Cup, hosted in Amsterdam, Netherlands, on 7-9 July.

Following the automatic seeding of  both Europe Cup Qualifiers, pools are as follows:

In France, the 24 participating teams (12 men’s and 12 women’s) were divided into 4 pools of 3 after the automatic seeding of the second edition of the 3x3 Europe Cup France Qualifier, which will be staged in Poitiers, France, on 23-24 June. In a rematch of last year’s France Qualifier final, the French hosts will meet Italy again in Pool D. D like Denmark, who will complete the pool. In Pool A, World Cup 2016 winners and arch-favourites Serbia will face Slovakia and a Turkish team, which had successful in youth categories on continental level (gold in 2015 and bronze in 2016 at the U18 Europe Cup).

The Netherlands will be the team to beat in Pool B after winning a historic bronze medal at the Europe Cup last year. The Dutchmen will face Croatia and Hungary, a competitive preparation for this year’s edition of the Europe, for which they’re automatically qualified.


Europe Cup 2014 winners Romania are in for a treat in Pool C with both Belgium and Switzerland.

In the women’s category, it won’t be a walk in the park for the French hosts in Pool A against Serbia, who finished 7th at the Europe Cup last year and Israel.

Every team in Pool B reached the Europe Cup last season, starting with Ukraine who reached the quarter-finals. They had even more success at the World Cup, where they won silver. Belgium and Austria will complete the pool.

3x3 World Champions Czech Republic will try to extend their dominance to the Old Continent. Ireland and Poland stand in their way in Pool C.


Last but not least, good luck to Latvia who will have to deal with 2015 European Games winners Russia and World Cup 2016 semi-finalists Spain.

5 men’s teams, meaning the winners of the quarter-finals and the winner of loser’s bracket will qualify for the event.

As Netherlands are automatically qualified as hosts, if they are one of the best 5 teams, then, the next team ranked in the final standings qualifies.

While in women’s, the 6 best teams, meaning the 4 teams that play the quarter-finals and the 2 winners of a loser’s bracket will be qualified for the 3x3 Europe Cup 2017 in Amsterdam on 7-9 July. Old rivals Spain and Slovenia will meet again in men’s Pool A. The two teams already met last year in the final of the Andorra Qualifier. Slovenia went on to win the Europe Cup title in Romania. Don't sleep on Georgia who have shined in youth categories in recent years (quarter-finals at the FIBA 3x3 U18 World Cup in 2016).

In Pool B, Poland and Czech Republic will attempt to make their return to the Europe Cup. It would be a first-ever achievement for Latvia with the men's team.

3x3 powerhouse Russia, winners of the 2015 European Games, will be the main attraction in Pool C. Germany and Israel will complete the pool.

Is Pool D the most unpredictable of them all? The Andorran hosts made an unexpected run at the World Cup last year, finishing 13th overall. Ukraine made an impression last year in Andorra, finishing 3rd and earning a ticket to Romania. Ireland as well is back in Andorra and watch out for the Greens if the high-flying Jordan Blount is back on the 3x3 court.

The best 6 men’s teams will qualify for the final. Meaning that the winners of the quarter-finals plus the two winners of a loser’s bracket will stamp their ticket to Amsterdam.

In the women’s category, just 5 teams will qualify meaning the 4 winners of the quarter-finals and the team that will survive the loser’s bracket.

Teams are divided in 2 pools of 5 and 4 respectively.

In the 5-team strong Pool A, reigning Europe Cup champs Hungary will avoid any other team that made the final last year. This won’t be a walk in the park though with the Andorran hosts, Estonia, Germany and Turkey.

The Europe Cup 2016 runners-up Romania  will be the team to beat in Pool B, where they will meet a Swiss team that finished 4th at the Europe Cup last year but also Italy and Slovakia.