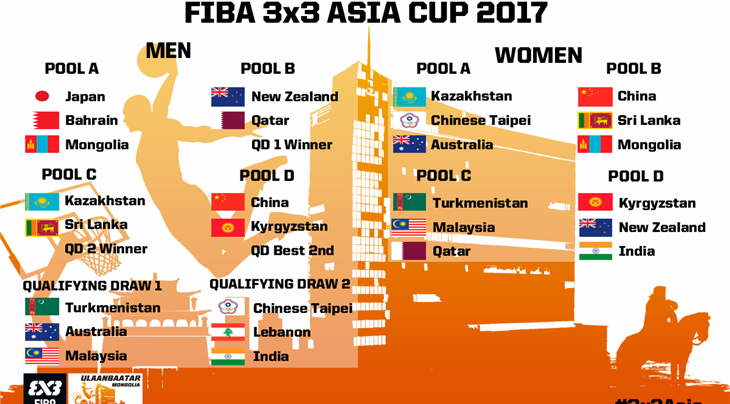 ULAANBAATAR (FIBA 3x3 Asia Cup) - FIBA 3x3 Asia Cup reigning champs and Asian powerhouse Qatar could open the tournament with 2 other contenders - New Zealand and possibly Australia - in Pool B following the automatic seeding of the FIBA 3x3 Asia Cup 2017, which will be staged in Ulaanbaatar, Mongolia on October 27-29.

Since 15 men's teams registered to play in the second edition of the FIBA 3x3 Asia Cup, the top 9 teams in the federation ranking at the November 1 2016 cut-off date got a direct ticket to the main draw while the other 6 will need to go through a qualifying draw.

This is how 2014 World Champs Qatar will meet New Zealand for sure in Pool B besides the winners of the Qualifying Draw 1, which includes Australia, Malaysia and Turkmenistan.

The seeding is conducted automatically according to the FIBA 3x3 Federation Ranking on September 1 2017. According to FIBA 3x3 regulations, teams are seeded as follows:

The Mongolian hosts - who won bronze at the recent Asian Indoors and Martial Arts Games - will meet the number one seed Japan and up-and-coming Bahrain in Pool A.

In Pool C, whoever wins a loaded qualifying draw 2 including Chinese Taipei, India and Lebanon will do battle with Kazakhstan and Sri Lanka.

The best second from the 2 qualifying draws will be seeded in Pool D, together with China (who won the U18 Asia Cup this season) and Kyrgyzstan.

In the women's category, 12 teams registered to the event therefore there will be no qualifying draw.

India won the last edition of the Asia Cup back in 2013 but will their young squad (22 years on average) have what it takes to deal with New Zealand's stars Georgia Agnew and Deena Franklin? Kyrgyzstan will complete the pool.

Australia will headline Pool A, with Chinese Taipei - who won bronze at the Asian Beach Games 2016 - and Kazakhstan.

The Mongolian hosts - who finished second in the last edition of the Asia Cup - were seeded in Pool B with Asian Beach Games 2016 winners China and Sri Lanka.

Last but not least, Malaysia have shined in U18 categories these last few years (2nd at the U18 Asia Cup this season). Will their senior team keep up with Qatar and Turkmenistan in Pool C?

The FIBA 3x3 Asia Cup 2017 will be played in Crocus Event Hall in Ulaanbaatar, Mongolia on October 27-29 and be livestreamed on youtube.com/FIBA3x3.