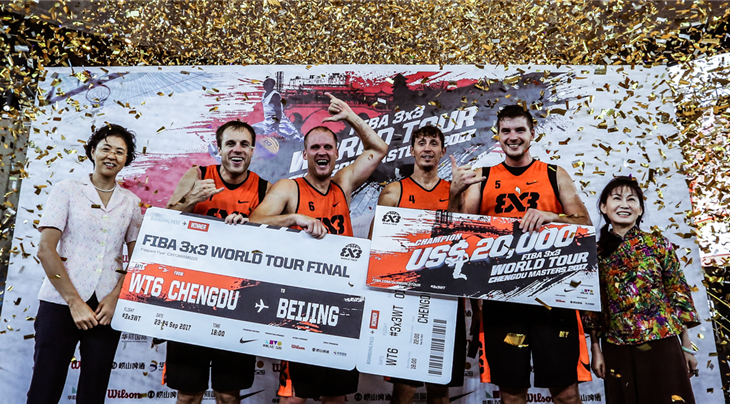 Two months after suffering a heart-breaking overtime loss in the final of the Utsunomiya Masters, Piran this time finished on the winning end of a nail-biter.

With his team down by 1 with 0.4 second to go, tournament top scorer and MVP Simon Finzgar aka 'The Sphinx' showed he was human but with the heart of a lion.

He iced the 2 free throws for the title - their first since the Lausanne Masters 2014 - and the automatic qualification for the FIBA 3x3 World Tour Bloomage Beijing Final on October 28-29.

The former number one player in the world wowed the Chinese crowd, who came in numbers in a stunning temporary venue set right in the center of Chengdu.

He scored 9 of his 40 points in the final. His teammate 25-year-old Anze Srebovt had a game-high 10 points.

Buckets, Lazar Rasic had plenty. His back-to-back-to-back 2-pointers completely changed the momentum of the final. The sharpshooter tallied 8 points, just like teammate Bogdan Dragovic. These 2 finished third and second in scoring respectively.

Piran become the 4th team to win a Masters this season and therefore clinch their spot for the Final, after Ljubljana (SLO), Novi Sad Al Wahda (UAE) and Liman (SRB). The top 12 teams in the World Tour standings after the last Masters of the season will travel to Beijing.

With just one Masters to go in Mexico City on September 30 - October 1, Saskatoon (CAN), Krakow R8 Basket (POL) and also Belgrade (SRB) - who will compete in Mexico - are guaranteed to make the Top 12 as well.

Lausanne (SUI) and Humpolec (CZE) currently rank 10th and 12th in the World Tour standings. They will both make it to Beijing unless a team currently out of the Top 12 wins or finishes 2nd at the Mexico City Masters or if Hamamatsu (JPN) finish at least 7th in the Mexican capital.

In the individual contests, Marko Savic (Novi Sad Al Wahda, UAE) redeemed himself by winning the Laoshan Shoot-Out Contest. The number 1 team in the World finished 6th overall in Chengdu, their worst performance at the World Tour in 2 years.