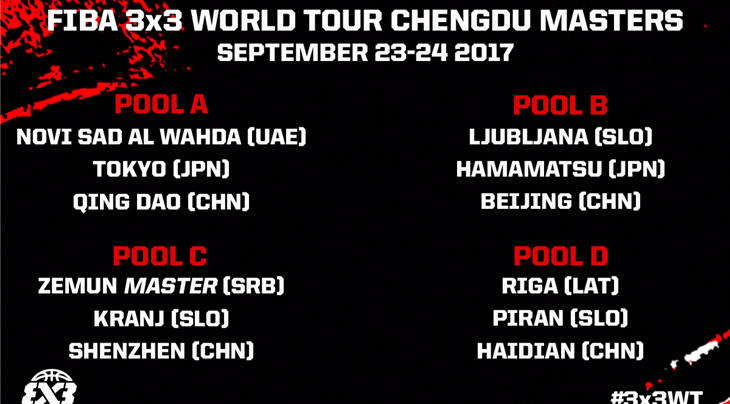 CHENGDU (FIBA 3x3 World Tour) - Just two weeks after their overtime clash in the Absolute Taipei City 3x3 Challenger, #4 seed Riga (LAT) and #5 seed Piran (SLO) are in for a rematch in the pool phase of the FIBA 3x3 World Tour Chengdu Masters on September 23-24.

Riga vs Piran will be the game to watch in Pool D after the Latvian side won a 21-19 thriller in Taipei City.

Also, the game will feature the exact same 8 players who represented their country in the final of the FIBA 3x3 Europe Cup. There again, Nauris Miezis and his Latvian teammates won.

Good luck to Team Haidian (CHN), who will complete the pool.

Pool A will be headlined by the number one 3x3 team in the world, Novi Sad Al Wahda (UAE), who are looking to become the first team to win 4 Masters in the same season.

Two Asian teams will look to slow down Dusan Bulut and his team:

Tokyo (JPN) have won both the JBA Japanese Championships and the Japanese 3x3 professional league (the .EXE Premier League) this year and can count on their star Keita Suzuki, who already was playing at the World Tour in the inaugural year back in 2012.

Qing Dao (CHN) should be taken very seriously after they won the CBA Chinese Tour and feature 2 players who represented China at the FIBA 3x3 World Cup 2016.

Ljubljana will be the team to beat in Pool B. The reigning World Tour champs have already secured their ticket to the Bloomage Beijing World Tour Final but they're here for the money: the 20,000 USD for the winners (or 10,000 USD for the runner-ups) and the prizes which will be given to the top 6 teams in the World Tour standings before the Final.

Keeping them company in the pool will be the team they defeated to win their second World Tour crown last year, Team Hamamatsu (JPN), who have struggled to regain their fine form this season.

Not the easiest of pools for the local hosts wildcard Team Beijing (CHN).

Last but not least, Pool C will be highlighted by Zemun Master (SRB), who will play in their 4th Masters this year but have not yet secured their ticket to the World Tour Final.

Standing on their way are a tough Kranj (SLO) team, who have played at the World Tour Final every year since 2013 (and finished 2nd overall in 2015).

Like this wasn't enough, Pool C will also feature maybe the most dangerous Chinese team, Shenzhen (CHN), who won the MCC Bloomage Qualifier with their US star Arnold Louis.

For those not attending the games in the heart of Chengdu, on Hong Xing Road Plaza (entrance is free!), pool games will start at 4.30pm local time (GMT+8) on Saturday live on FIBA 3x3's official YouTube channel. The top-two placed teams from each pool advance to a standard knock-out round which starts at the quarter-finals stage, from 5.15pm local time on Sunday.