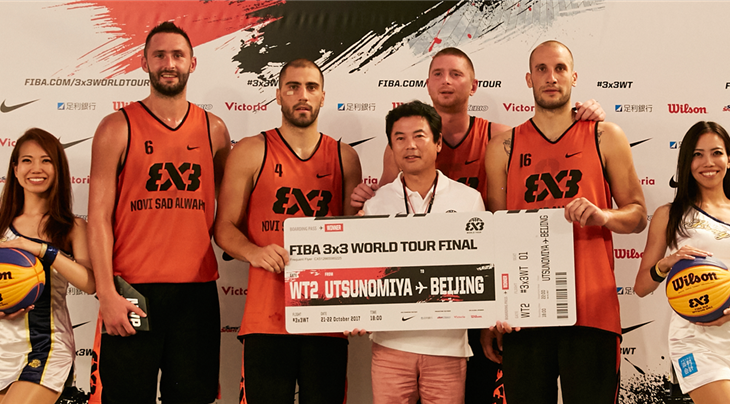 With the two teams tied at 15 after 10 minutes, the game went to overtime. The first team to score two points wins but Novi Sad Al Wahda star Dusan Domovic Bulut chose to drive to the basket for 1 point. Piran's Simon Finzgar aka 'The Sphinx' imitated him on the next possession. With the game on the line, Bulut dove for the loose ball and found Savic trailing for the winning lay-up.

Dejan 'The Maestro' Majstorovic had a game-high 8 points in the final, that cemented his 1st place in the scoring list and helped him win MVP honors in Japan.

Finzgar had a team-high 7 points for Piran in the rematch of last year's Utsunomiya Masters final, which was a lot more thrilling this year (Novi Sad Al Wahda won 21-13 in 2016).

Team Ulaanbaatar (MGL) made history at the Utsunomiya Masters. For the first appearance of a Mongolian team at the World Tour, they first knocked out the reigning World Tour champions Ljubljana (SLO) in the pool phase before going all the way to the semi-finals.

In the individual contests, Justin Darlington (CAN) wowed the massive Japanese crowd in front of the iconic Futaarayama Jinja shrine and won his second dunk contest of the season in 2 weeks.

Krakow R8 Basket (POL) star Michael 'Money in the Bank' Hicks stole the show at the the Shoot-Out Contest with 13 points, including two money balls from the 3x3 logo.

The third Masters of the season will be staged in Prague, Czech Republic on August 5-6 and feature 6 of the top 10 teams in the FIBA 3x3 Team Ranking, including Novi Sad Al Wahda and Ljubljana. Both these teams have already clinched their spot in the Bloomage Beijing Final after winning the first two Masters of the season.