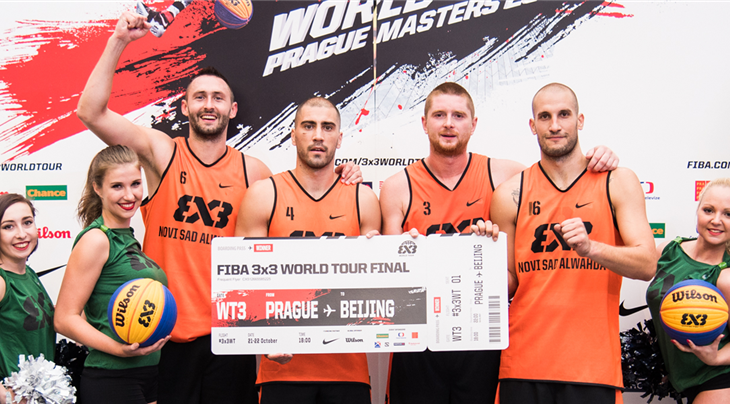 Dejan Majstorovic scored his team's first 6 points and gave them an early 5-point lead. Novi Sad Al Wahda never looked back to earn their third title (in 5 editions) at the Prague Masters.

The sharpshooter had a game-high 9 points in the final while his team-mate Dusan Bulut added 8, including the game-winning lay-up. The number one 3x3 player in the world was named MVP of the tournament, his 7th MVP award in World Tour history.

Zelimir Zagorac had a team-high 5 points for Ljubljana, who lost their opener and only made it to the quarter-finals on overall points scored after a three-way tie.

Ljubljana won the first Masters of the season in Saskatoon, Canada and are the only other team not named Novi Sad Al Wahda to have their ticket to the World Tour Final in Beijing.

Zeljko Palavra (Vitez) was the leading scorer with 41 points on Wenceslas Square, the iconic UNESCO World Heritage where the event was played over two days.

In the individual contests, the pocket-sized (5ft 9in, 1.75m) Gediminas Zitlinskas from Lithuania wowed the massive crowd and won the Dunk Contest on his first appearance at a World Tour event.

Ljubljana's captain Ales Kunc won a thrilling StreetSportLine Shoot-Out Contest after he clocked the fastest time in a three-way tie.

The fourth Masters of the season will take place in Lausanne, Switzerland on August 25-26. Novi Sad Al Wahda will make their first ever appearance in the Olympic Capital and attempt to claim a third consecutive Masters this year.