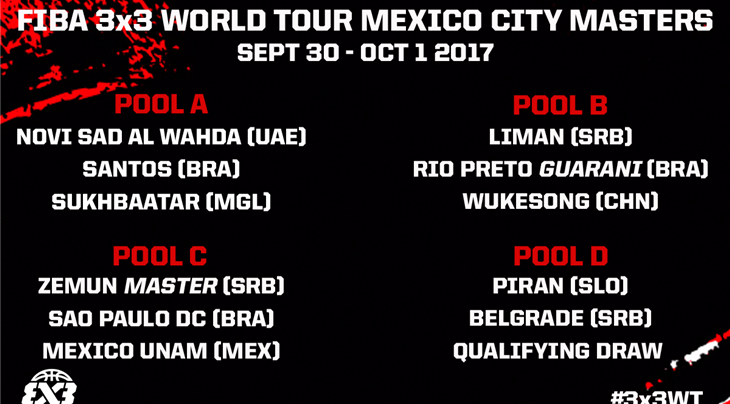 MEXICO CITY (FIBA 3x3 World Tour) - Fresh off their thrilling win at the Chengdu Masters, Piran (SLO) could well square off with 2 Top 20 teams as soon as the pool phase at the FIBA 3x3 World Tour Mexico City Masters on September 30 - October 1.

You'd think Piran deserve some rest after their Chinese heroics.

Well, not at the World Tour! The Slovenians have a meeting with 5th seed and 8th team in the World, Belgrade (SRB) in Pool D. Their second opponents are still unknown. It will be the winners of the qualifying draw, which will feature 2 Mexican teams and World Tour 2016 runner-ups and 17th team in the World, Hamamatsu (JPN).

The Japanese team - featuring players of Indian origin - has been a disappointment at the World Tour this season with pool phase exit both in Saskatoon and Chengdu. However, there is hope for Hamamatsu fans as their rising star 25-year-old Amjyot Singh will make his 2017 debut in Mexico City.

Pool A will feature the number one 3x3 team in the World, Novi Sad Al Wahda (UAE), who finished 6th last weekend in Chengdu, their worst performance at the World Tour in more than 2 years. They will start their Mexican campaign against 3x3 FISU World University League 2017 winners, Team Sukhbaatar (MGL). Next in line is Team Santos (BRA), who have revamped 75% of their roster since their appearance at the World Tour Final back in 2014.

Liman (SRB) will be the team to watch in Pool B. The young Serbian team (25 years on average) will play their opener against Wukesong (CHN), who can count on 2 US players, including Beijing Masters 2015 MVP Chris Reaves. Rio Preto Guarani (BRA) will complete the pool.

For those not attending the games in the Perisur Shopping Mall, pool games will start at 12.10pm local time (GMT-5) on Saturday live on FIBA 3x3's official YouTube channel. The top-two placed teams from each pool advance to a standard knock-out round which starts at the quarter-finals stage, from 1.15pm local time on Sunday.