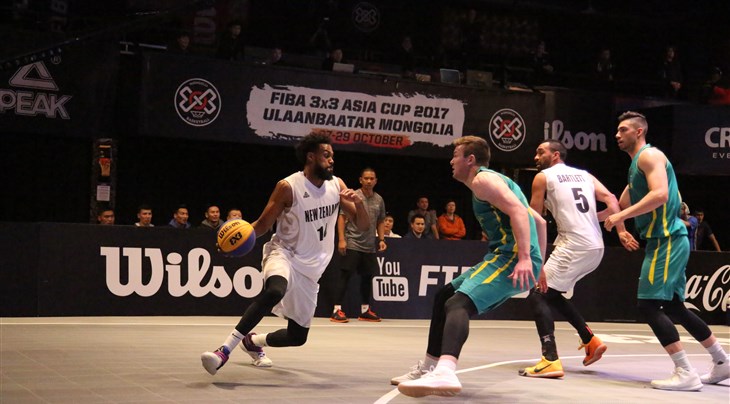 ULAANBAATAR (FIBA 3x3 Asia Cup) – New Zealand won both their games to top Pool B on Day 2 of FIBA 3x3 Asia Cup in Ulaanbaatar on October 28 2017. Meanwhile, Mongolia’s women team continued the host nation’s undefeated streak – by way of notching the game of the day against China.

Team of the Day: New Zealand

New Zealand opened Day 2 against their neighbors and rivals Australia in a clasico. The well-rounded New Zealand team owned the paint with FIBA 3x3 World Tour player Rory Fannon.  From the outside Alonzo Burton showed his sharpshooting range in the 21-12 victory over Australia. New Zealand faced a tough match up again against Qatar but Burton caught fire again as he scored three 2-pointers to mark a 21-17 victory. New Zealand will face Kyrgyzstan in the quarter-finals tomorrow.

Game of the Day: Mongolia vs. China (Women)

On the women’s side China vs. Mongolia was another nail-biter. Thanks to the playmaking and a few mean crossovers by Ganzul Davaasuren, Mongolia edged out China 16-14.

Kazakhstan’s Anton Kotenko used to be king of one-on-one streetball. Now he brought his skills to 3x3 and he was everywhere on the court. While playing both full games, Kotenko secured Kazahkstan’s top place in Pool D and a Top 5 play.

Day 3: 12pm local time (GMT+8) with the knock-out games and the finals