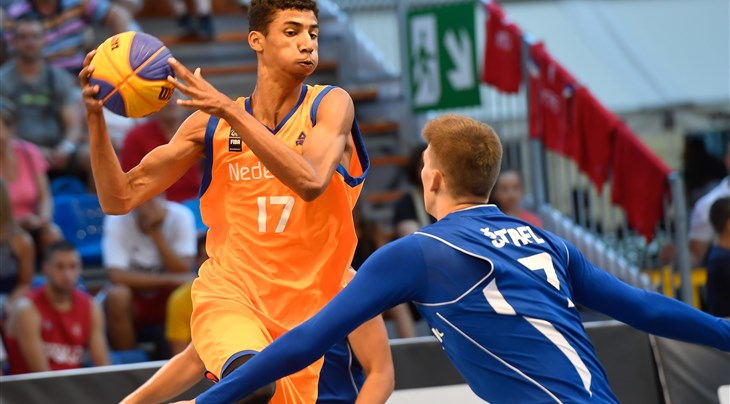 Team of the Day: Netherlands (men and women)

Netherlands' women started the day with a clutch victory against Poland at the buzzer courtesy of Julia Jorritsma (11-9) who showed that she has more ice in her veins than the Night King. Just after that, the Dutch men showed the Czech Republic why they finished second at the last U18 World Cup, by winning with a difference of 7 points (16-9).

To finish on top of Pool C, the Orange Angels defeated Ukraine comfortably with the final score of 20-11.

While on the men's side Maik Bouwer and company stepped up in a rematch of the 3x3 U18 World Cup 2017 final against Belgium. It wasn't a walk in the park for them, as the game finished 15-12, but the Netherlands, remained on top of Pool A and will face Estonia or Hungary in the quarter-finals.

Game of the day: Netherlands-Belgium (MEN)

The rematch of the 3x3 U18 World Cup 2017 final was the game of Day 2 at the 3x3 U18 Europe Cup. The Netherlands started the match with a comfortable lead, but Vincent Peeters scored 8 points in total to remind the crowd why he was in the team of the tournament at the last World Cup. Though Peeters' points weren't enough, as Nouhi was held to only 2 points and the Netherlands had their revenge with the final score of 15-12.

Yes, another great 3x3 player coming from Serbia. Kovacevic was just unstoppable today in Debrecen. He led Serbia in the scoring charts in both games, scoring 9 against hosts Hungary in their competition debut and 8 against the Europe Cup Hungary Qualifier winners Estonia to guide Serbia to a 2-0 record and the quarter-finals. Can Kovacevic lead Serbia to the continental title that they're missing in 3x3?

The last qualifier of the Shoot-out contest was postponed due to weather conditions and will be staged tomorrow at 13:10h (GMT +2), just before the start of the games.

Day 3: Games start tomorrow Sunday at 13:30h (GMT+2) with the last game of the pool phase (Hungary v Estonia - men) that had to be postponed due to weather conditions. After that, the knock-out games and the finals.