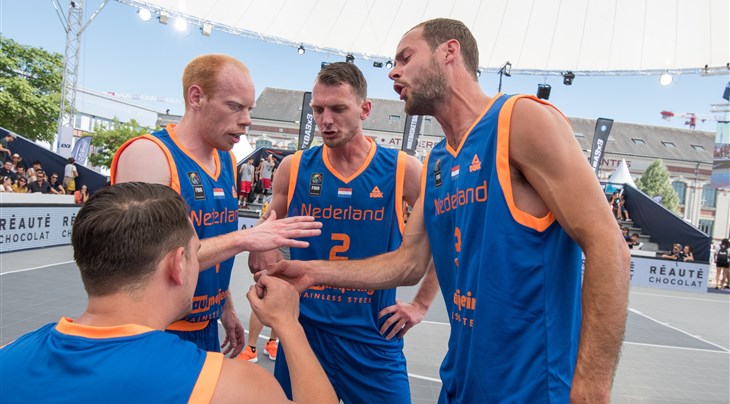 NANTES (FIBA 3x3 World Cup 2017) – Netherlands had a perfect day in both men and women categories in Nantes, France on June 17 2017. Indonesia shocked New Zealand and Dusan Domovic Bulut caught fire in the game of the day against Russia - Here's our wrap-up.

Team of the Day: Netherlands men AND women

It all started with the men: a convincing 22-6 win over South Korea with Joey Schelvis catching fire from behind the arc (10pts) and then a historic 19-12 win against USA with an unstoppable Jesper Jobse (11pts).

The women were the icing on the cake, with back-to-back wins against Japan (16-9) and the World Cup 2016 silver medalists Ukraine (17-12). Jacobine Klerx led the team in scoring and finished second overall on the day, with 13pts.

There were a lot of good games, including a few thrillers like Andorra's buzzer-beating win against Egypt, Netherlands' historic upset of USA and Indonesia's success against New Zealand. However the heavyweight fight between Serbia and Russia lived up to the hype and provided enough highlights for a full Top 10.

After a timid start in a surprisingly close game against Egypt (17-15), 'Mr Bullutproof' showed the massive French crowd why he's been the number one 3x3 player in the world for the last 2 years. He was unstoppable against Russia, with 15 points and topped all scorers on Day 1 with 21 points.

Ok Bulut's 15 points against Russia were impressive but we had to give credit to South Korea star Lee Seung Jun, who carried his team in a heart-breaking overtime loss against New Zealand (13-15). The part-time model scored 11 meaning he was involved in all but 2 points for South Korea in that game.