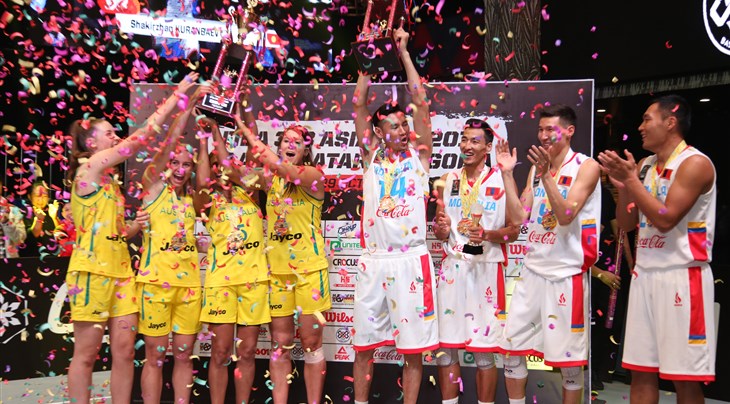 In their 1st appearance at the FIBA 3x3 Asia Cup, the Australian women left their mark as they went on an impressive 5-0 record at the Crocus Event Hall in the Mongolian capital.

16-year-old Isabell Bourne started her first game with only 1 point but from then on took off. She scored a total of 34 points throughout the tournament including 7 in a close semi-final match-up against China. The tournament MVP scored 8 in the final game and got a little help from Carlie Smith (7 points) for the win over Malaysia (21-15).

In the men’s category, the Mongolian hosts had a tough route to the final. In the semi-final that went to overtime, they beat an impressive Australian team who had made their way through the tournament from the Day 1 qualifying draw.

Mongolia met New Zealand in the final and turned on theatrics for the home crowd. The atmosphere was electric as the two teams remained within almost 2 points throughout the game. Mongolia pulled away in the final minutes and won 19-14, thanks to the play-making of MVP Dulguun Enkhbat and the scoring of Tsenguunbayar Gotov. New Zealand’s Alonzo Burton also made it to the Team of the Tournament.

For the bronze medal, Australia met a red-hot Anton Kotenko (Kazakhstan), who was a scoring machine with 47 total points. Australia took an early lead but Kotenko was not ready for the party to end. He brought Kazakhstan within striking distance. However, Lucas Parker combined with Owen Odgie to earn the bronze medal for Australia.