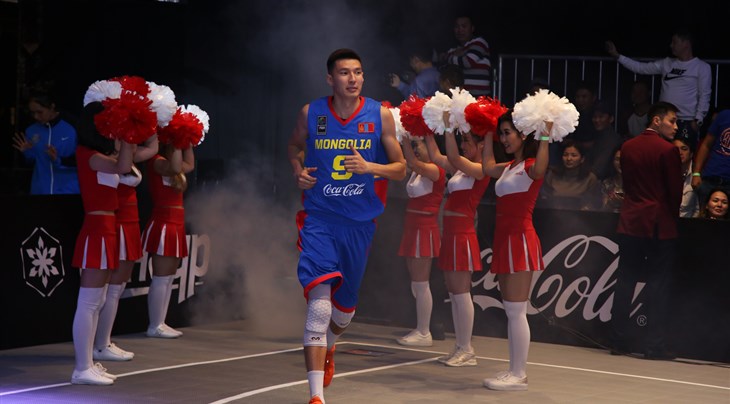 While the crowd cheered for their host nation and their 2-0 start, they also supported Shakirzhan Kuranbaev (Kyrgyzstan) as he led the way in points and spectacular plays. Let's not forget the ladies as New Zealand enjoyed a come-back win against India in the Game of the Day.

Team of the Day: Mongolia

Mongolia dominated both their games on Day 1. With fans on their feet, Mongolia outscored Bahrain by 11 points in their first match-up (22-11). In Day 1's final game and the premier match up of the night, the Mongolians faced a more experienced Japan team led by Tomoya Ochiai and Kenji Hilke however this didn’t slow them down. Mongolia led 7-0 after three minutes. Ochiai and crew eventually closed the gap with less than 5 minutes to go however Mongolia’s consistent drives to the basket led them to a 21-16 victory. Not to mention, Tsenguunbayar Gotov and Dulguun Enkhbat were third and fourth in the scoring charts respectively.

Game of the Day: New Zealand vs. India

New Zealand started out of the gate with a 5-point lead against India and some spectators might have thought the game was a wrap. Then India got hotter than an Indian summer going on a 10-zip run to take a commanding lead. But New Zealand wasn’t finished yet! With less than a minute to go, New Zealand brought the score within 2 at 14-12. Then 19-year-old Stirling Walker-Pitman tied the game with a 2-pointer. In the dying seconds of the game, star player Jess Bygate sealed the deal with a free throw.

The speedy 5ft 6in (1.70m) Kuranbaev showed size does not matter! He scored from everywhere. Against India he masterminded scoring plays and showcased his own ability to take it to the basket in a Top 5 play. While in a Pool D showdown, he scored 17 of 20 points against China. Even though they lost, you can't say he wasn’t trying!