McKinnie: "3x3 has helped me grow as a leader" 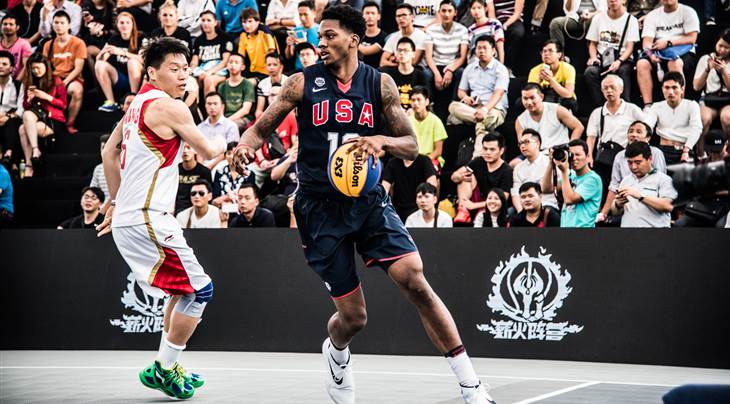 CHICAGO (FIBA 3x3) - When a team is deciding to start a 3x3 team, guys like Alfonzo McKinnie are the prototypical players one must have on its four-man roster. Hailing from the Windy City, McKinnie, a 2.04m freak athlete, is a problem for other defenders to contain him and is destined to show you how hoopers from Chi Town get down.

With his size and athleticism, he can play anywhere from the post to the perimeter and is most lethal in pick-and-roll situations. He’s also a madman on the defensive end, too. McKinnie's sending opponents' shots into the bleachers if they come into the paint thinking they’re scoring easy. His athleticism even earned him the "Mount McKinnie" nickname and has defenders ducking him - literally - when he's attacking the rim with a full head of steam. (Feel free to peep his mixtape if he you need anymore justification)

We caught up with Mount McKinnie to discuss this upcoming season, 3x3 at the Olympics, repping for Team USA and more.

For those that don't know, what's the 3x3 competition like?
Alfonzo McKinnie: 3X3 competition is a pretty tough competitive league. There’s different guys from different countries and different areas that have different styles of play and players from what I’m used to. The European and South America guys have a different style of basketball than we do here in the U.S.

What separates 3x3 from running 5s?

AM: For one, the rules to the game are pretty much different as far as shot clock, time and game time. You get four players per game—three on the court and one sub. It’s a lot more strategy at half court because three people one on a half court setting is pretty big. There’s a lot of space to maneuver around in order for a team to be successful playing 3x3.

And how has that helped your game?

AM: I kind of use 3x3 as a conditioner. It’s a fast-paced game with 10-minute running clock and pretty much getting the ball out of the net and taking it beyond the 3-point line and just going from there. It’s helped my conditioning over the summer. Overall, it’s helped me with my decision-making. With a 20-second shot clock, you gotta pretty much have to make pretty quick decisions on the fly, so I think those are some of the things 3x3 have helped me with.

AM: I think 3x3 has helped me grow as a leader because there were certain times where I would have a mismatch and I would have to let the guys know what we need to do and step up and play a bigger role than the previous game. 3x3 also helped me with my 1-on-1 skill set because it is actually a lot of 1-on-1 in 3x3. A lot of times, those guys would guard me so it would give me the ability to go 1-on-1 and be able to allow me to do what I’m able to do. That kind of helped me coming into this year playing in the D-League.

The decision if 3x3 will be considered an Olympic sport will be in July. Are you for 3x3 making the Olympics in 2020?

AM: Man, I’m all for it. Before last summer, I probably looked at 3x3 like a streetball sport, but once I did partake in it and went to all the events and seen how serious it was and how other guys are taking it serious, how they practice and prepare for it and how they come out and play, I think 3x3 should be a sport in the Olympics. It’s pretty popular especially over in Europe and South America. I think it would become more popular in the United States now too. For it to be considered an Olympic sport, it’d be great.

If it were passed, what would having the opportunity to rep USA in Tokyo mean to you?

In the past, your team lost to Serbia and Team Ljubljana. Is that an important matchup you’d like to see in the future to get that revenge?

AM: Yeah, most definitely. Playing against Serbia in one of those playoff games last year that was definitely a team that we would want to play against. I feel like last year was our first year and we just look unprepared and those guys practice hard and they’re really a close-knit group of guys and they were to get us. I feel like if we got another crack at it, I know me and the other guys would love that.

What was it like to represent your home country at the 3x3 World Championships?

AM: It was great for me just to go to China. I’ve never been to China so it was an experience—a great experience for me being able to be there. On top of that, being able to represent the U.S. is an honor. A lot of guys don’t get the chance to do that, so for us to do it as a bunch of guys coming out of Chicago starting off playing as a Chicago team and being selected to play was something great for us and our city. And we just went out there and played as hard as we can.

With the season right around the corner, what are your personal goals for the season?

AM: We’d like to accomplish winning the tournament overall. Winning is the ultimate goal and we came up short last year, so for us to come back and compete again would be the ultimate goal to win it and knockout a couple of those teams or those Serbian teams and teams that everybody glorifies. I think we’re able to do so we just got to come out hungry and compete how we know we can do and I know we can get the job done.

What’s been the best part of your 3x3 career so far?

AM: The best part is even though we came in second, we were the first men’s team to place that high and win a medal in the event. I also got the chance to compete in the dunk contest against some professional dunkers and I came in second [place]. I was pretty proud of myself for those two accomplishments.

What do you hope to accomplish when your 3x3 career is done?

AM: It’s the NBA since I was a little kid. I think 3x3 has helped me a lot and I’ve opened some people’s eyes just to who Alfonzo McKinnie was and what we can do on the court. I kind of translated that to the 5-on-5 thing and just producing this year in the D-League and I think I’m real close to getting that shot to the NBA. The NBA is the ultimate goal—always.