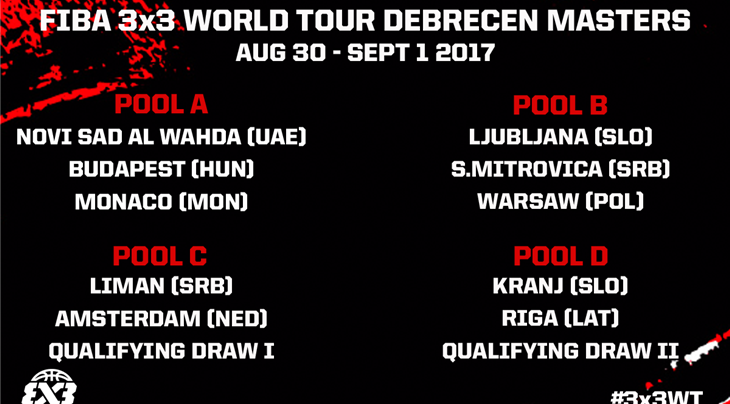 DEBRECEN (FIBA 3x3 World Tour) - The new team on the rise from Riga (LAT) will face familiar opponent Kranj (SLO) and the winners of a qualifying draw in the pool phase of the FIBA 3x3 World Tour Debrecen Masters on August 30 - September 1.

Together again! With their core four of Agnis Cavars, Edgars Krumins, Karlis Lasmanis and Nauris Miezis, the Latvians won every tournament they played this summer, from the FIBA 3x3 Europe Cup (representing Latvia) to the Tinkoff Moscow Open and Raiffeisen Bank Bucharest Challengers.

But with Lasmanis unavailable and Krumins out with a knee injury, Riga sank against Novi Sad Al Wahda (UAE) in the semi-finals of the Lausanne Masters last weekend.

In Debrecen, they will meet again the team they beat in the Moscow Open Final - number 4 seed Kranj (SLO) - who shot the lights out in Lausanne and impressed with convincing wins against a star-filled Cergy (FRA) and the defending champs (Saskatoon, CAN) and a last-second loss against Novi Sad Al Wahda.

The question mark from both Riga and Kranj is the third team in Pool D. For the first-time ever, a FIBA 3x3 World Tour event will start with a qualifying draw.

Six teams have been divided in 2 pools and the winners of each pool will make it to the main draw of the Debrecen Masters.

Aachen (GER), Debrecen (HUN) and Zaporizhzhya (UKR) will be the ones competing for a spot in Pool D with Riga and Kranj.

Two minutes into the story and we've already namedropped Novi Sad Al Wahda twice... The number one 3x3 team in the world is looking to win their 4th Masters in a row, with the returning Dusan Bulut.

And to stop them in Pool A are Budapest (HUN), who feature two players who also have a Serbian passport. Keep an eye on Tamas Ivosev, who nearly played with Bulut, Savic and Zdero on the Serbian team, that ended up winning the FIBA 3x3 World Cup 2012 and started to take over the World Tour.

The last team in Pool A is a hybrid Monaco (MON) team who features 2 French and 2 Slovenian players, including former Ljubljana player and World Tour 2013 winner, Rok Smaka.

Speaking of Ljubljana, the World Tour reigning champs will be joined in Pool B by two newcomers: Warsaw (POL) and S.Mitrovica (SRB).

Last but not least, Pool C will be extremely competitive with the number six 3x3 team in the world, Liman (SRB) and number 12, Amsterdam PM Inox (NED). The winner of a qualifying draw including Belgrade (SRB), London (GBR) and Vevey (SUI) will complete the pool.

For those not attending the games in Kossuth Square (entrance is free!), pool games will start at 6pm local time (GMT+2) on Thursday live on FIBA 3x3's official YouTube channel (the qualifying draw on Wednesday will not be livestreamed). The top-two placed teams from each pool advance to a standard knock-out round which starts at the quarter-finals stage, from 5.30pm local time on Friday.