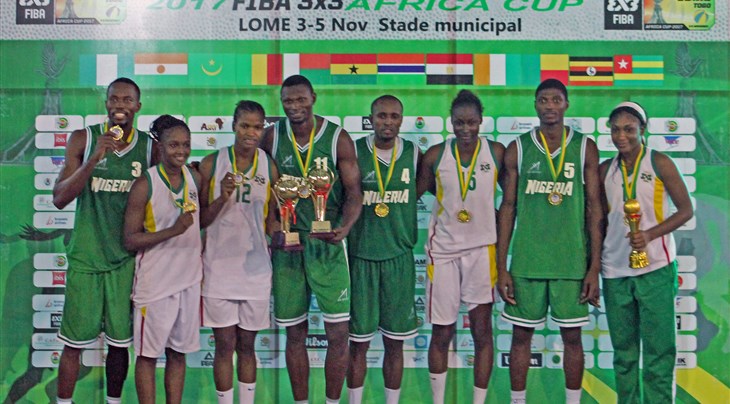 Mali had a perfect 6-0 record in the covered outdoor venue of Stade Omnisport Eyadema de Lomé. But none of their 6 wins were more hard-fought than the final against Nigeria: a 12-11 thriller, where Mali top scorer Djeneba Ndiaye had a game-high 5 points.

Nassira Traore was limited to just 2 points in the final but the sharpshooter was a leader for Mali all week and was named MVP of the Tournament.

Nigeria's come-back in the last minute of the game fell short despite Nkem Akaraiwe and Josette Anaswem scoring 5 points apiece.

Just like Traore, Nigeria star Nkechi Akashili struggled in the final (1 point) but was named in the Team of the Tournament for her overall contribution at the Africa Cup. She finished third overall in scoring with 28 points.

The final member of the Team of the Tournament was the women's top scorer, 20-year-old sniper Jamila Nansikombi, who scored no less than 44 points in 6 games and led Uganda to a much-deserved bronze medal in Togo.

Nigeria absolutely dominated the men's category. They didn't just have a clean 5-0 record, they won every single one of their games before the 10-minute limit. The final against Cote d'Ivoire was no exception.

The smallest man in a green uniform (6ft 2in, 1.88m), tournament MVP Azuoma Dike had a game-high 9 points in the final, including 2 shots from outside the arc and led Nigeria to a one-sided 21-9 win.

Cote d'Ivoire came out to play on Sunday and beat Mali in a 14-13 nail-biter in the quarter-finals and Madagascar in the semi-finals to take home the silver medal.

Their star, 28-year-old Cheick Tidiane Traore, earned a place in the Team of the Tournament next to Dike and tournament top scorer, 20-year-old Elly Randriamampionona, who spearheaded Madagascar's third-place finish in Togo.

Randriamampionona wasn't done yet: he also won gold at the Shoot-Out Contest, after beating out Mamadou Keita of Mali (silver) and Fatoumata Kone of Cote d’Ivoire (bronze) in the final.