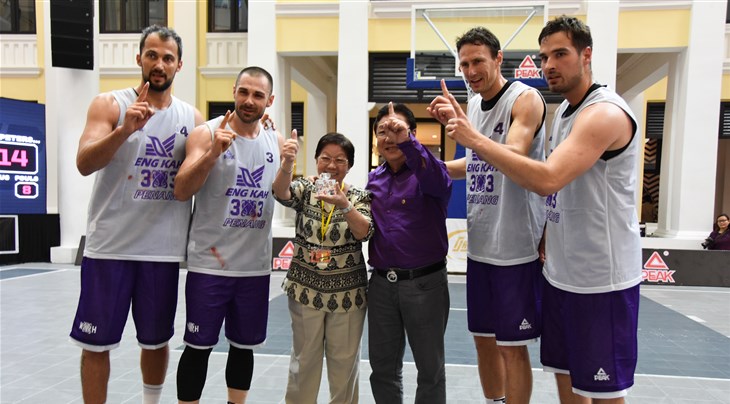 In what is branded to be one of the world’s food capitals, the FIBA 3x3 World Tour champions have been cooking all weekend, finishing the event with a perfect 6-0 record.

Their star player Jasmin Hercegovac aka 'The Iceman' was named MVP after topping all scorers with 67 points, including 23 shots from behind the arc in the packed Gurney Paragon shopping mall.

Ljubljana did not need to win the second challenger – these standalone international tournaments which qualify directly for the FIBA 3x3 World Tour – of the season to book their ticket to the Utsunomiya Masters on July 29-30.

Since the team finished second in the FIBA 3x3 Team Ranking last year, they were automatically guaranteed a spot in 3 different Masters and chose Saskatoon, Utsunomiya and were assigned to Debrecen.

However, the Slovenian side gladly took home the 6,000 USD winning prize and the additional FIBA 3x3 ranking points, which bring Hercegovac a step closer to Dusan Domovic Bulut from Serbia as the number one 3x3 player in the world.

3x3 Russian star Ilya Alexandrov finished second in scoring and led St Petersburg all the way to the final. His team won 4,000 USD and a return to Japan – they finished 4th at the Utsunomiya Masters last season.

At age 35, Alexandrov could make his first-ever appearance at the World Tour, an oddity considering he’s represented Russia in all national team competitions since 2012, including a gold medal at the 3x3 event of the 2015 European Games.

Since Ljubljana already had their ticket to Utsunomiya, third place Krakow R8 Basket (POL) – known as Team Gdansk (POL) on the World Tour the last two years – clinched their ticket for a second Masters in 2017.

After finishing 5th in the FIBA 3x3 Team Ranking last year, Krakow were allocated to the Lausanne Masters.

This means 7 of the 12 participating teams at the Utsunomiya Masters are already known: Ljubljana (SLO) and Piran (SLO) [based on the ranking], Auckland (NZL), Krakow R8 Basket (POL) and St Petersburg (RUS), Ulaanbaatar (MGL) and Zemun (SRB) [via a direct qualifier, the New Zealand Burger King Quest, Nanjing Challenger and Penang Challenger respectively].

The next FIBA 3x3 Challenger will be staged in Huai An, China on May 20-21. This said, the two best teams there will not qualify to Utsunomiya, but to the Chengdu Masters on September 23-24 instead.