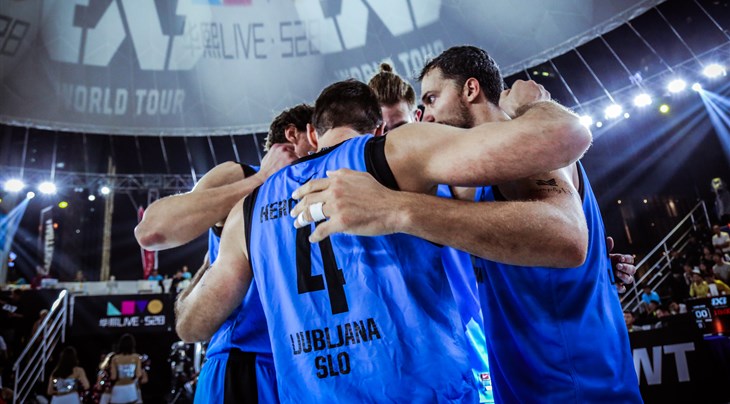 The reigning World Tour champs were in cruise control on the opening day. After a 22-13 win against Beijing (CHN), they defeated the team they beat last year in the title game of the World Tour Final, Hamamatsu (JPN), who were playing with just 3 players in China.

The towering Birdman (2.16m) was cooking all day and finished 3rd overall with a team-high 17 points, including 5 shots from behind the arc and a couple of thunderous dunks.

Coincidentally, the top 3 scorers of the day competed in Pool B. Hamamatsu's Bikramjit Gill aka 'The Bearded King and Beijing's Zhang Ziyi topped the scoring charts with 18 points apiece.

After defeating Hamamatsu in their second game, Beijing earned their ticket to the next round. They will be the only Chinese team in the quarter-finals.

Their next challenge will be Zemun Master (SRB), who won Pool C after winning a thriller against Kranj (SLO) 17-14.

Another anticipated match-up was the last game of the day in Pool D between Riga (LAT) and Piran (SLO), just two weeks after Riga beat Piran in overtime in the final of the Absolute Taipei City Challenger.

Simon Finzgar caught fire and Piran became pyromaniac. The former number one 3x3 player in the world had a game-high 7 points in an important 21-14 victory, which not only guaranteed first place but also meant Piran would avoid the #1 seed Novi Sad Al Wahda (UAE) in the quarter-finals.

Finzgar was named player of the day after a spectacular opening game against Haidian (22-9), where he threw down a mean alley-oop on a set play.

Riga will meet Novi Sad Al Wahda (UAE), who started with a quiet 21-12 win in Pool A against Qin Dao (CHN) and had to work a little harder against an inspired Tokyo (JPN) team (21-14).

Dusan Bulut was the top scorer for Novi Sad Al Wahda (21-15) but Marko Savic lived up to his 'Serbian surgeon' nickname with a no-look pass right on the money against Tokyo.

In the Shoot-Out Contest Qualifier, Jiayi Wang (Qing Dao) led all scorers with 8 points. He will be joined in the final by Meng Zhang (Haidian), who had 7 and Marko Savic and Blaz Cresnar aka 'Birdman' who scored 6 points apiece.