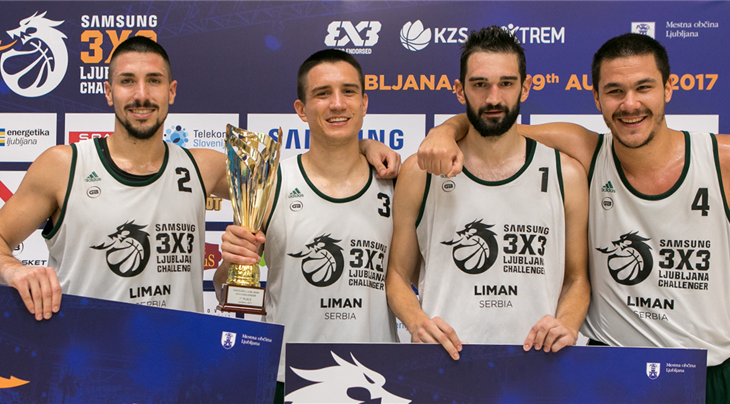 After dropping their last pool game against Monaco (MON), Liman switched gear and beat the top 3 teams in Slovenia in a row, starting with Piran in the quarter-finals, Kranj in the semi-finals and eventually, Ljubljana, in convincing fashion (21-13).

The 25-year-old Stefan Kojic was named MVP of the event after a dominating performance in the final and a 3rd place overall in the scoring list.

His teammate Stefan Stojacic finished second while the number four 3x3 player in the world Jasmin Hercegovac (Ljubljana) won the scoring charts in the Slovenian capital.

It is Liman's second Challenger title this season after Ulaanbaatar 2 months ago.

This means the young Serbian team gets a chance to compete in a third FIBA 3x3 World Tour Masters this season (in Debrecen on August 31 - September 1) after finishing 5th in Saskatoon and 3rd in Utsunomiya.

Because Ljubljana were already qualified for the Debrecen Masters (based on ranking), surprise third place Monaco also earned a ticket to Hungary.