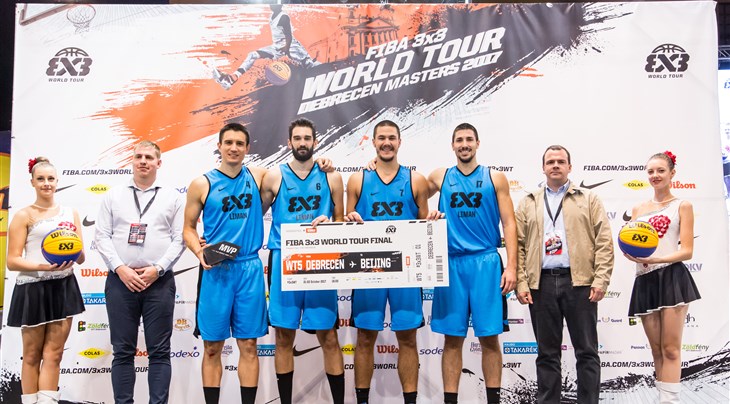 The young Serbian team (25 years on average) started the final on a 9-2 run and never looked back. The event top scorer and MVP Stefan Stojacic had a game-high 8 points and capped off the final with an emphatic dunk.

His team-mate Aleksandar Ratkov was quiet in the final (3 points) but the hero in the semi-final against the winners of the last 3 Masters, Novi Sad Al Wahda (UAE). The 25-year-old scored a game-high 8 points but none bigger than an insane no-look circus game-winner falling out of bounds in the dying seconds of the game.

Liman become only the third team to win a Masters this season and therefore secure a ticket to the FIBA 3x3 World Tour Bloomage Beijing Final, after Ljubljana and Novi Sad Al Wahda. The top 12 teams in the World Tour standings after the last Masters of the season will travel to Beijing.

The number four 3x3 player in the world Jasmin Hercegovac had a team-high 7 points in the final for Ljubljana, who were competing in their 3rd title game at the World Tour this season (1st place in Saskatoon and 2nd place in Prague and Debrecen).

For the first time in World Tour history, the event was extended to 3 days, with a qualifying draw featuring 6 teams on the opening night, an innovative way to increase access to the World Tour to more teams and organizers. Zaporizhzhya (UKR) and Belgrade (SRB) both survived the qualifying draw and the latter went all the way to the quarter-finals.

In the individual contests, Amsterdam PM Inox (NED) sharpshooter Joey Schelvis buried the last 2 'money balls' from the 3x3 logo to shut down the Shoot-Out Contest.