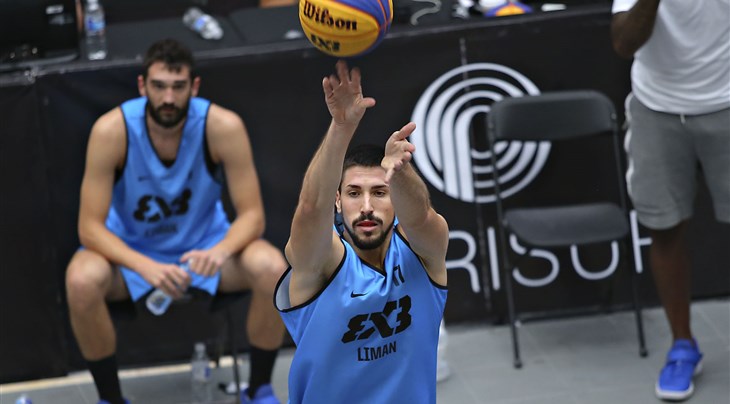 Liman, who won the Debrecen Masters one month ago, were absent from last week's Chengdu Masters but they made their presence known in Mexico as they opened Day 1 with 2-0 start.

Aleksandar Ratkov led the team in scoring with 21 points and added one of his signature Top 5 circus shots in a 21-15 victory over Rio Preto (BRA).  Stefan Stojacic was his predictable flawless self scoring 16 points including 2 dunks and earning Player of the Day honors.

Meanwhile, the other Serbian players won their pools as well. In Pool A, Novi Sad Al Wahda (UAE) started off a bit jetlagged against Sukhbaatar (MGL) but soon broke away with 21-12 victory. In their next match, there was no question who was the number one team in the world with a 21-6 victory over Santos (BRA). Dusan Bulut led the team in scoring with 18 points.

Pool D featured the game of the day between last week's winners Piran (SLO) vs. Belgrade (SRB). Belgrade held a comfortable lead consistently throughout the game but Piran showed their experience to come back to within 2 points. The final score was a 18-15 win for Belgrade.

In the race for the FIBA 3x3 World Tour Bloomage Beijing Final, Hamamatsu (JPN) had a chance to qualify if they reached 7th place or higher. They won the qualifying draw to enter into Pool D however they were knocked out of the tournament after losing both their pool games. They now have no chance to reach the Final.

The 3 Brazilian teams Rio Preto, São Paulo DC and Santos are the last 3 teams who can stop 12th-ranked Humpolec (CZE) from playing in Beijing. But for this to happen, at least one of them must reach the final of the Mexico City Masters.

The 10th-ranked Lausanne are now guaranteed to fly to China after the 3 Brazilian teams each of them dropped a game in the pool phase, since the first tie-breaker in the World Tour standings is winning percentage. Lausanne finished 2nd at the Lausanne Masters with an 80% winning percentage (the only loss they suffered was in the final against Novi Sad Al Wahda).