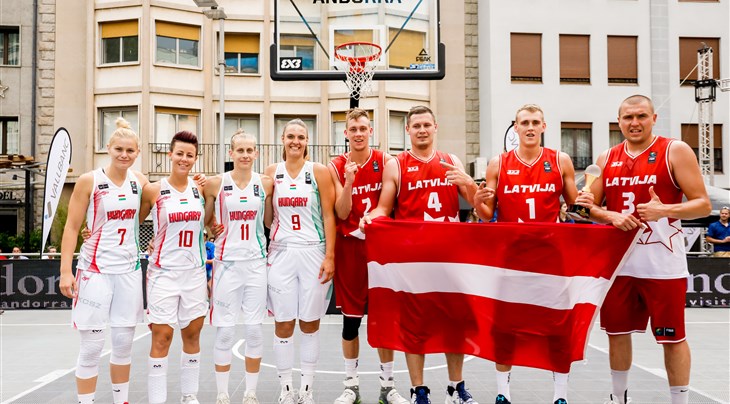 In the men's category, Latvia made quite an impression in Andorra, winning all 5 games, including a 21-14 landslide over FIBA 3x3 World Cup 2017 quarter-finalists Russia.

This will mark Latvia's first participation at the FIBA 3x3 Europe Cup in the men's category (the women's team featured in the 2014 edition).

Their star Nauris Miezis not only topped all scorers (40pts) in Andorra, he was also named MVP of the tournament. Dmitrii Kriukov (Russia) finished 2nd (33pts) while Ukraine's Sasha Koberts was 3rd with 32pts.

The event saw the reigning European champs Slovenia struggle mightily. Gasper Ovnik's men only secured their ticket after edging out a young German team (18-16) in the loser's bracket.

The victory however came at a price: big man Adin Kavgic had to leave the game due to injury and is now questionable to play at the FIBA 3x3 Europe Cup.

In the women's category, the reigning European champs Hungary won a nail-biter (16-14) in the final against Switzerland.

The top scorer of the FIBA 3x3 World Cup 2017 Bettina Bozoki once again won the scoring charts, with 46 points. Her team-mate Dora Medgyessy - who is back after missing the World Cup - followed with 40 points while Italy star Marcella Filippi finished 3rd with 35.

Overall, 11 teams secured their ticket to the FIBA 3x3 Europe Cup 2017, which will be held in Amsterdam, Netherlands, on July 7-9.