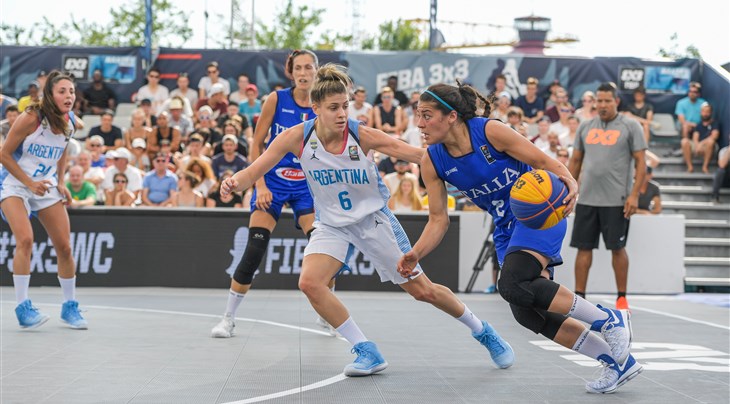 Team of the Day: Italy (women)

After sending the reigning World Champs Czech Republic back to school on Day 2, Italy continued their perfect streak on Tuesday. The pocket-sized Rae Lin D'Alie (5ft 5in, 1.68m according to the very generous press kit) drove the lane like a Ferrari in Monza and Federica Tognalini led the team in scoring in both wins against Argentina (15-5) and Andorra (18-11).

More than 1,000 fans packed the bleachers of Parc des Chantiers for the most anticipated game of the day between the reigning European champs Slovenia and the French hosts. Anze Srebovt showed a great mix of power and soft touch outside the arc and was the game's top scorer with 8 points. The 25-year-old silenced the French crowd after hitting a contested 2-pointer to give Slovenia a 19-14 lead with 1' to go. Angelo Tsagarakis led a furious comeback for France but ultimately fell short (17-19).

The number 12 3x3 player in the World made his team-mates shine in the game of the day against France (just 4 points but countless assists). In the second game against the Philippines, the 34-year-old veteran showcased his ridiculous skills and led all scorers with 7 points.