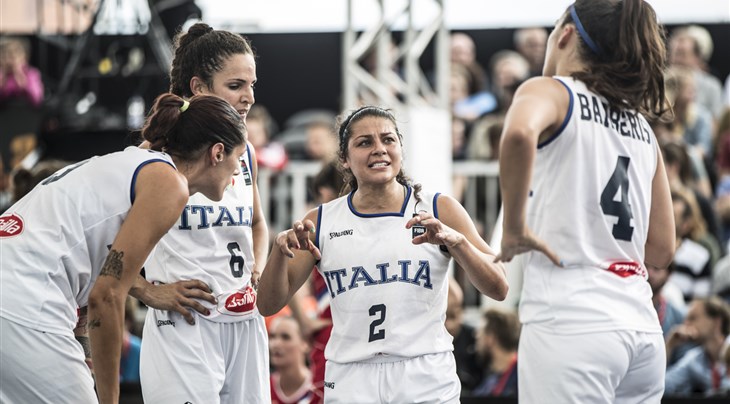 Team of the Day: Italy women

The Azzurre may have been the most impressive women's team so far. They started the day with a destruction of Serbia (14-10) with Marcella Filippi topping all scorers with 9 points. They finished the day with an annihilation of the 2016 World Champs Czech Republic (21-11). Filippi and team-mate Federica Tognalini scored 9 points apiece and the pocket-sized 'Rae Rae' D'Alie wowed the crowd with her blazing speed and gaudy passes. They will play Spain in the quarter-finals.

Just a week after they traded victories at the Andorra Qualifier, Russia and Spain were at it again and the game lived up to the hype with countless lead changes. With 1'30 to go and Spain building their biggest lead of the game (12-9), Anastasia Logunova said 'not so fast', buried a big shot from behind the arc and added a free throw. Anna Leshkovtseva gave Russia the lead (13-12) but Paula Palomares responded immediately with a great drive and a beautiful fake. With the game seemingly heading into overtime, Logunova scored a difficult turn-around jumper off the glass for the win. Russia will play Serbia in the quarter-finals while Spain will face the team of the day, Italy.

We didn't plan to put the number one 3x3 player in the world here. By his own standards, he had a sub-par performance with just 10 points in 2 games. He did ice the game-winner in Serbia's opener against Hungary but got a big scare after hurting his ankle on a drive. 'Mr Bulluproof' started the game against Spain on the bench and it looked like he may not see the court at all. When he came back, that happened.

They qualified for the final (July 9): Biljana Pesovic (Serbia) and Krisztina Süle (Hungary)