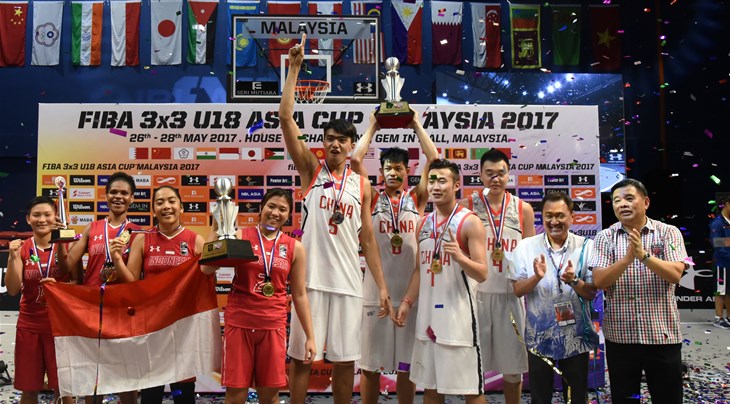 Indonesia won their first major 3x3 national team tournament in a packed Gem-In shopping mall. After dropping their opening game in the pool phase, they went on to win their next four, including a dominating performance in the final against the Malaysian hosts (13-6).

Western New Guinea native Lea Kahol outscored the entire Malaysian team in the final (8 points), finished 4th overall in scoring and won MVP honors. The 5ft 10in (1.78m) talent patrolled the paint in Cyberjaya and was joined on the Team of the Tournament by Malaysia’s Suet Ying Foo and China’s ZiHui Yuan.

The latter led China past Singapore in a hard-fought battle for the bronze medal (17-14).

In the men’s category, China’s men won gold after defeating Chinese Taipei in the final (17-12).

In the semi-finals, China had already put the world on notice following a convincing win against U18 Asia Cup and U18 World Cup reigning champions Qatar (21-12).

17-year-old Hoanan Li scored in every position in the final and tallied 9 points. He finished 5th overall in scoring (33 points) and was named MVP of the competition.

Sharpshooters Chen-Ya Chang (Chinese Taipei) and Faisal Abuissa (Qatar) joined him on the Team of the Tournament.

Nady Hachem led all scorers in Malaysia but could not lead Lebanon past Qatar in the third-place game.

The event - hosted by FIBA in cooperation with the Malaysian Basketball Association (MABA) and organized by NBL Asia - featured 32 teams from 17 different countries.