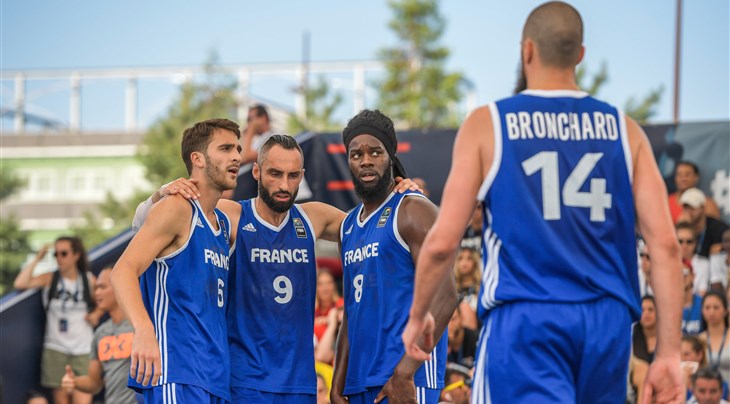 In the men’s category, only three teams finished the first day undefeated.

Reigning World Champs Serbia defeated Turkey and Slovakia in the iconic Place du Maréchal-Leclerc in Pool A. Switzerland put on a show and had a perfect record in Pool C. In Pool D, France defeated both Denmark and Italy.

Sharpshooter Joey Schelvis topped all scorers with 23 points and led the Netherlands to 1st place in Pool B though all 3 teams in the pool were tied with a 1-1 record.

In the women’s category, France won both games in Pool A. World Cup bronze medalist Ukraine also finished undefeated in Pool B.

In Pool D, Paula Palomares was the hero after hitting the game-winner against a Russian team that had won the FIBA 3x3 World Cup just 2 days ago. Russia's Anastasia Logunova was the top scorer on Friday with 19 points and both teams advanced to the quarter-finals tomorrow.

In Pool C, World Cup 2016 winners Czech Republic had a big scare after losing against Poland but secured their ticket to the quarter-finals after beating Ireland, who also qualified.

Action is back tomorrow at 12:00 CET with the knock-out games.

In the men’s category, the winners of the quarter-finals and the winner of a loser’s bracket qualify for the Europe Cup (5 teams).

In the women’s category, the winners of the quarter-finals and the two winners of the loser’s brackets (6 teams) will play in Amsterdam, Netherlands, at the FIBA 3x3 Europe Cup 2017 on July 7-9.