Hercegovac: "I never stopped practicing for the World Tour" 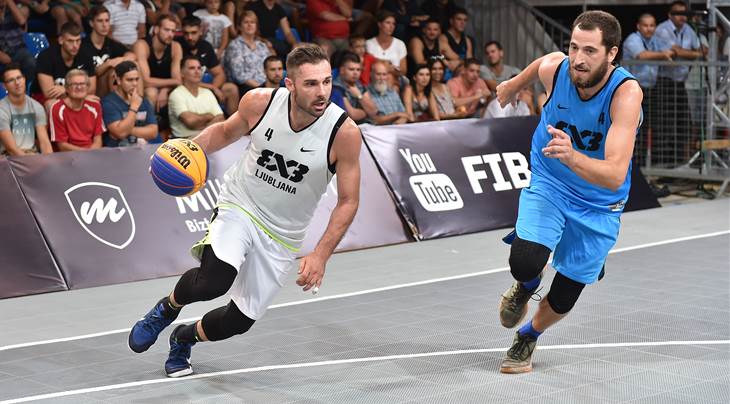 LJUBLJANA (FIBA 3x3 World Tour) - Our 3x3 expert Drew Ruiz spoke with Jasmin Hercegovac after the 3x3 World Tour 2017 calendar announcement. Hercegovac has been itching to return to the court since last year. While many players and teams tend to recuperate and take time off after completing a full season and winning a championship, Hercegovac and his team, Ljubljana, did the opposite of their peers and continued to work like they came in last place.

"I never stopped practicing. I was practicing like the season never ended," the Slovenian sharpshooter said. "There's no games or refs, but all of us played for two months [and] we never stopped. You have guys that stopped for a whole month and I never did that because you don't feel well."

Ljubljana took home bragging rights and the title in 2016 after Hercegovac scored a season-high 50 points in five games and was named MVP at the FIBA 3x3 World Tour Final in Abu Dhabi on 27-28 October.

But Hercegovac doesn't live in the past. For him, yesterday was history and tomorrow is a mystery.

As the 2017 season tips off in a bit more than 100 days and the season calendar was just unveiled, he has a chance to make history once again. With two titles under its belt (2013 and 2016), another championship in 2017 will make Ljubljana the first-ever FIBA 3x3 team to win the World Tour three times.

And does he have this as one of his top personal goals for the season? Nope. As a matter of fact, he didn't even know he had the chance to accomplish this milestone until it was brought up to his attention.

Realizing he and his team have a bulls eye on his back, Hercegovac won't make any preseason predictions or set the expectations for what he hopes Ljubljana will accomplish, but with the team's offseason preparation and the way the team has formed a camaraderie and ability to jell over the years, he knows that being crowned champion and being the team to beat for another year isn't something that's out of reach.

"Our goal is to win it again and I think that we're physically prepared. It's the mental things. With that attitude and mental approach, I don't have any fear that we're not going to be successful. How the season ends we'll see, but we definitely would like to win it again. We're going for it."

With 1,049,400 points, he ranks 1st in his country and 4th in the world, and it would be considered fake news that there's any doubt whatsoever that he's the best shooter in 3x3. He gives defenders fits every time he steps on the court because his game is so unpredictable.

If the defender goes under on a dribble hand-off and/or pick-and-roll, by the time you recover, the only sound you’ll be hearing is the whip of the net. How do you say buckets in Slovenian?

OK, so you know he can shoot and try to play him tight and close the gap? Ha, good luck with that. Expect a hesitation or a dribble combo to throw defenders off balance followed by a blow-by past them while the only thing they see are the numbers on the back of his jersey and followed by a point added on the scoreboard. The final thing the Iceman needs to add to his repertoire is to point to his forearm, insinuating that there's ice in his veins, after he hits clutch shots.

Aside from having another great season, his other goal is to play through 2020. If Father Time doesn’t come knocking on his door before, he knows he’s capable of lacing them up and playing the sport that he loves after that, too. “Everything depends on how you have your life arranged. I can play, realistically, at least five years. If you work for yourself and watch your food, how you practice and take care of yourself on every possible level. It’s never 100 percent but at least it’s high level. In 2020, I know I can do it."