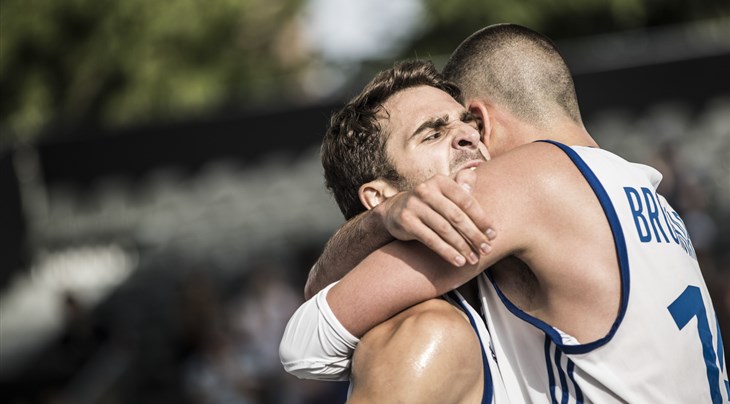 AMSTERDAM (FIBA 3x3 Europe Cup 2017) – France made quite an impression on Day 1 of the FIBA 3x3 Europe Cup after finishing with a perfect 2-0 record both in the men and the women's categories. Alexander Zakharov just could not miss and France vs. Russia was an absolute thriller. Here's our wrap-up.

Team of the Day: France (men and women)

France's women started with a bang with a 19-13 win over Ireland with the towering (6ft 5in, 1.95m) Ana Maria Filip scoring a game-high 7 points.

The men followed in their footsteps with a hard-fought 21-19 win against a spectacular Swiss team. 'The Tsar' Angelo Tsagarakis found his range from behind the arc and finished with 9 points and Dominique Gentil stepped up in money time to score the game-winner.

France's women then broke the heart of the massive Dutch crowd with a narrow 13-11 win against the Netherlands and the pocket-sized Caroline Hériaud had a little something to do with that. She scored 7 points, including a pair of nasty crossovers.

And things went even more wild in France's men last game. Jump to "Game of the Day" to read our recap.

And just when it seems France were cruising to an easy win, Alexander Zakharov went on a Zakh Attack and made it on rain from long range until Russia made it a 1-point game (19-20).

But this is when 'The Undertaker' Charles-Henri Bronchard calmly went to the line to sink the winning free-throw for Les Bleus.

Saying the 24-year-old caught fire against Switzerland wouldn't do him justice. Zakharov was in super sayian mode in Russia's opener with a whopping 15 points, including 6 bombs from behind the arc.

You'd think he would cool down against a defensive-minded French team? The 6ft 8in (2.03m) put Russia on his back with a second double-digit performance (10 pts), with some burning hot catch and shoot action.

On Sunday, don't let this guy catch fire like that. With the Van Gogh and Rijksmuseum just around the corner, this could get dangerous.

They qualified for the final (July 9): Angelo Tsagarakis (FRA) and Aleksandr Zakharov (RUS)