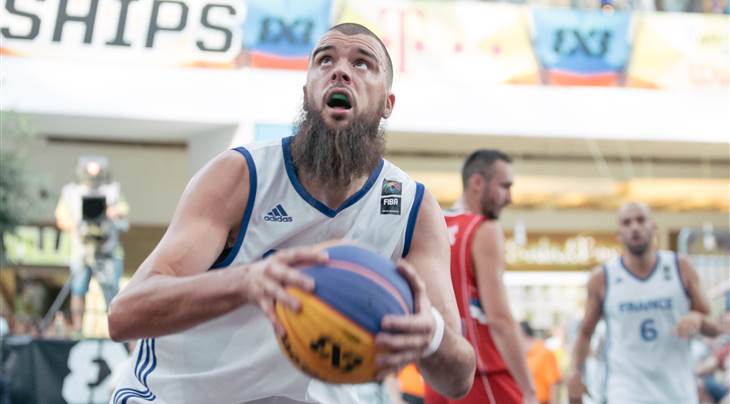 VOIRON (FIBA 3x3 World Cup) - The number one 3x3 player in France, Charles-Henri Bronchard, has already started the preparation for the FIBA 3x3 World Cup, which will be staged in Nantes, France on 17-21 June 2017.

Sixteen players were called up by the French basketball federation (FFBB) to attend a training camp in Voiron on 17-19 February.

Among them stood Bronchard, a 2-metre tall colossus who sports the most iconic beard on the 3x3 scene.

"This year we play the World Cup at home," the 34-year-old said. "The staff is very determined."

"I know some players who think about the 3x3 World Cup every day!" - Bronchard

Bronchard burst on the 3x3 scene in 2015, when he led his Team Paris to the semi-finals of the FIBA 3x3 World Tour Prague Masters.

The skilled big man had mixed results in his sophomore year, bringing Team Paris to the final of the Lausanne Masters but coming back to Earth at the FIBA 3x3 European Championships in Bucharest, where France lost in the pool phase without winning a single game.

"After Bucharest, I could cry," the man also known as "The Undertaker" admitted. "It was tough mentally but now when I look back, I want to be optimistic: we were still new to the game."

The three-day training camp was an opportunity for new players to be tested and to get more experience and chemistry for the French international.

"People played extremely hard on the court but the atmosphere was great," he reported.

"There's a unique camaraderie in 3x3: you go to war one day but the day after, you get a friend request on Facebook!" - Bronchard

"I really liked some of the young players we brought, especially that Djoko kid."

At 34, Bronchard is one of the veterans and vocal leaders of the French national team.

He explained he took the floor at the camp to speak about the competition at the upcoming World Cup: "We want to impress in Nantes but we know the level will be high.

"I know [reigning world champions] Serbia will be among the favourites again but I beat that team already once [at the Prague Masters, where all 4 Serbian internationals played as Team Novi Sad Al Wahda] and that gives me a great deal of confidence."