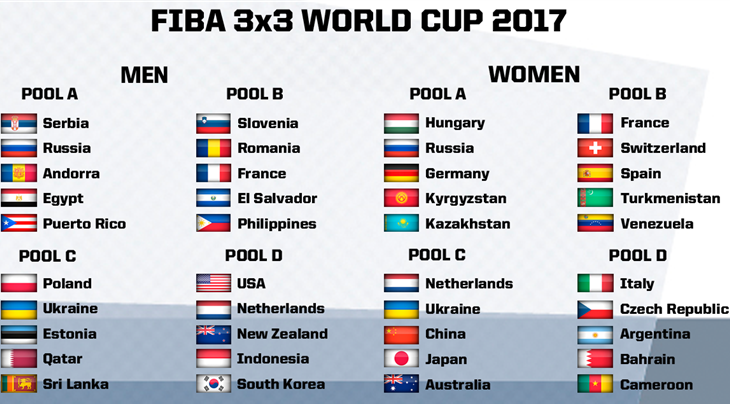 NANTES (FIBA 3x3 World Cup) – The 40 participating teams (20 men’s and 20 women’s) were divided into 8 pools of 5 after the automatic seeding of the fourth edition of the FIBA 3x3 World Cup, which will be held in Nantes, France on 17-21 June.

The French hosts are up to a hard task in the men’s Pool B against the last two winners of the FIBA 3x3 Europe Cup: Romania (2014) and Slovenia (2016). The Philippines and newcomers El Salvador will complete the pool.

The seeding is conducted automatically according to the FIBA 3x3 Federation Ranking of each national federation at the 1 March 2017 cut-off date. As per FIBA 3x3 regulations, teams are seeded as follows:

The reigning world champions Serbia will also need to bring their A-game to claim one of the two tickets to the quarter-finals in Pool A after they were drawn with 2014 World Championships bronze medallists Russia and Puerto Rico, who have been very successful on the FIBA 3x3 pro circuit. Andorra and Egypt won’t make things any easier.

Pool C will be highlighted by 2014 World Champions Qatar. Apart from Sri Lanka, the Qatari team will have to deal with 3 European teams with Estonia, Poland and Ukraine.

Last but not least, 2016 World Cup silver medallists USA will meet 2016 Europe Cup bronze medallists Netherlands and a New Zealand team that has won 2 world titles in U18 categories in Pool D. Indonesia and South Korea will complete the pool.

Similar to the men’s tournament, the last 2 winners of the FIBA 3x3 Europe Cup will meet in the pools already. Hungary (2016) and Russia (2014) will be the heavy favourites in Pool A. Germany, Kyrgyzstan and Kazakhstan will be looking for an upset.

The French hosts are up to a challenging opening too as they will compete with Spain and 2016 FIBA 3x3 Europe Cup semi-finalists Switzerland, not to forget Turkmenistan and Venezuela.

What if women’s Pool C was the most unpredictable of the entire bracket? Ukraine will be a team to watch after winning silver last year in Guangzhou, China. But there won’t be any easy 21-point game against Australia, China, Japan and Netherlands (quarter-finalists last year).

Fans can find more information about the event - including the full schedule - on the official competition website and react to the seeding on social media with the hashtag #3x3WC.