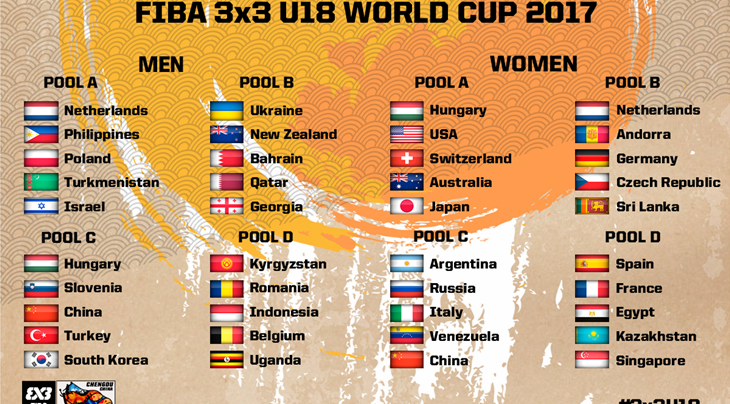 The winners of the last two editions in the same pool? That’s men’s Pool B for you, with 2015 champions New Zealand and 2016 winners Qatar. Add 2016 quarter-finalists Georgia, Ukraine and Bahrain to that and the fun starts on Day One in the capital of the Sichuan province.

In Pool A, 3x3 powerhouse the Philippines will hope to make their first-ever trip to the U18 World Cup quarter-finals, after their promising silver medal at the FIBA 3x3 U18 Asia Cup last season. Not a walk in the park with Israel, the Netherlands, Poland and newcomers Turkmenistan.

The Chinese hosts will have quite a hurdle to clear in Pool B with 3 European forces, with Hungary, Slovenia and Turkey, who won gold then bronze in the last 2 editions of the FIBA 3x3 U18 Europe Cup. South Korea will complete the pool.

Belgium will be the team to watch in Pool D after an impressive silver medal at the U18 Europe Cup last year. Indonesia and Romania meet again after the former shocked the latter in the pool stage at the U18 World Cup last year in Kazakhstan. Newcomers Kyrgyzstan and Uganda will make for a wide open fight to the quarter-finals.

In the women’s category, prepare the popcorn for Pool A with two-time U18 World Cup winners USA, U18 Europe Cup 2015 winners Hungary and U18 Asia Cup 2016 champions Japan. Add 3x3 powerhouses Australia and Switzerland and you have the most exciting pool in the competition.

Four European teams were stacked in Pool B, including Andorra, Germany, the Netherlands and U18 Europe Cup 2016 bronze medallists Czech Republic. Not the dream draw for newcomers Sri Lanka.

A lot of big names in Pool C for the Chinese hosts with Argentina, Italy, Russia and Venezuela.

Last but not least, the winners of the last 2 editions France will face European rivals Spain in Pool D. Keep an eye on Kazakhstan who won silver at the U18 Asia Cup last year. Egypt and Singapore will complete the pool.

Fans can find more information about the event - including the full schedule - on the official competition website and react to the seeding on social media with the hashtag #3x3U18.