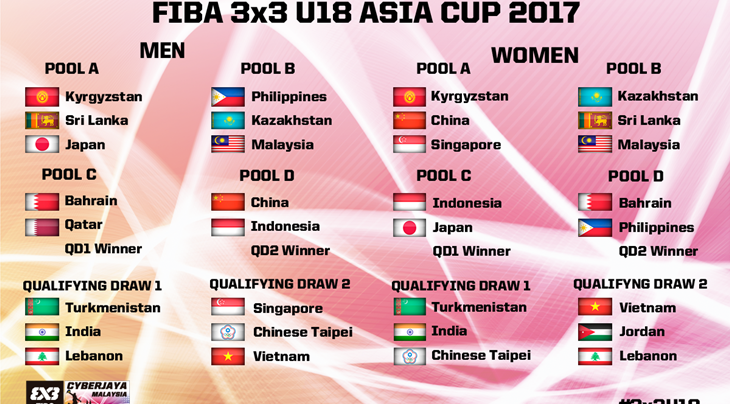 The 20 best teams in the FIBA 3x3 Federation Ranking on the 1 November 2016 cut-off date (including the hosts) got an automatic spot in the main draw and were divided into 8 pools of 3. The other 12 teams were placed in a qualifying draw with 4 pools of 3. The winners of each 1 of these 4 pools will join the main draw.

In the women’s category, the reigning champs from Japan will face 3x3 powerhouse Indonesia and the winner of a qualifying draw featuring Chinese Taipei, India and Turkmenistan in Pool C.

The seeding is conducted automatically according to the FIBA 3x3 Federation Ranking of each national federation at the 1 March 2017 cut-off date. As per FIBA 3x3 regulations, teams are seeded as follows:

Pool B will be one of the highlights of the pool stage with last year’s silver and bronze medallists, Kazakhstan and Malaysia, not to forget Sri Lanka.

In the men’s category, Qatar will start their title defence in Pool C against their Bahraini neighbours and the winners of a very competitive qualifying draw starring India, Lebanon and Turkmenistan.

Similar to the women’s slate, Pool B will feature the Philippines and Malaysia, who won silver and bronze last year and produced one of the most thrilling games of 2016. Kazakhstan will complete the pool.

Fans can find more information about the FIBA 3x3 U18 Asia Cup, presented by Under Armour - including the full schedule - on the official competition website and react to the seeding on social media with the hashtag #3x3U18.

Before the event, Under Amour will organise U18 events named “Under Armour 3x3 Southeast Asia 2017 Tournaments” in 4 of the participating countries: Indonesia, Malaysia, the Philippines and Singapore.