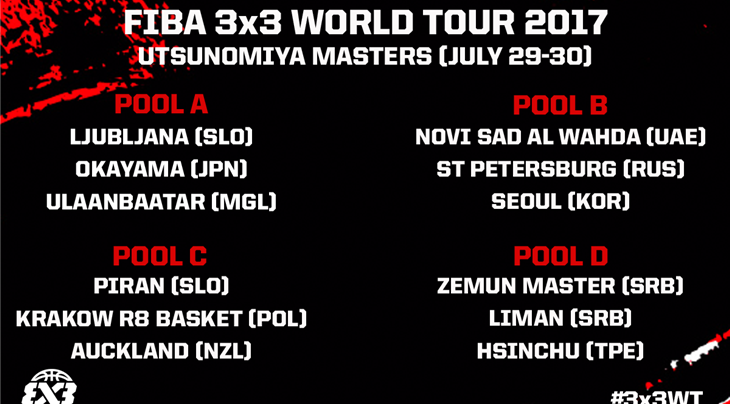 Just 2 weeks after winning the first Masters of the season in Saskatoon and with their new number one 3x3 team in the World status, Ljubljana come back to Japan, where they finished 3rd in 2016. This is where they first met Okayama (JPN), in a convincing quarter-final win (20-14). Warning for the champs though: Okayama got significantly better in the offseason, with the arrival of the ATHLETIC Devaughn Washington, who shined at the Manila Masters back in 2015.

It is unlikely Ljubljana understimate Ulaanbaatar in Pool A after losing against the first ever Mongolian team to qualify for the World Tour at the Nanjing 3x3 Challenger. Jasmin Hercegovac & co. avenged the loss since then at the Ulaanbaatar 3x3 Challenger.

Pool B will be headlined by Ljubljana nemesis Novi Sad Al Wahda (UAE), who make their first appearance at the World Tour this season. Last year's Utsunomiya Masters winners come back without the injured Marko Zdero and are up to another face-off with Team St Petersburg (RUS), whom they've already met 4 times at the World Tour and beaten 3 times. Seoul (KOR) will complete the pool, with the talented Seung Jun Lee, who shined for South Korea at the FIBA 3x3 World Cup 2017.

Last year's finalists Piran (SLO) will meet Krakow R8 Basket (POL), who were known as Gdansk last year. This means 3x3 star Michael 'Money in the Bank' Hicks is back at the World Tour. Not an easy pairing for Team Auckland (NZL), who will also feature in Pool C.

Last but not least, the future of Serbian 3x3 basketball will highlight Pool D with both Zemun Master and Liman, the number 5 and 7 teams in the World respectively. None of these 2 teams feature a single player over the age of 30. Good luck to the winners of the Chinese Taipei National Quest Hsinchu, who will complete the pool.

For those not attending the games in front of the Futaarayama Jinja shrine (entrance is free!), pool games will start at 2.30pm local time (GMT+9) on Saturday live on FIBA 3x3's official YouTube channel. The top-two placed teams from each pool advance to a standard knock-out round which starts at the quarter-finals stage, from 2.30pm local time on Sunday.